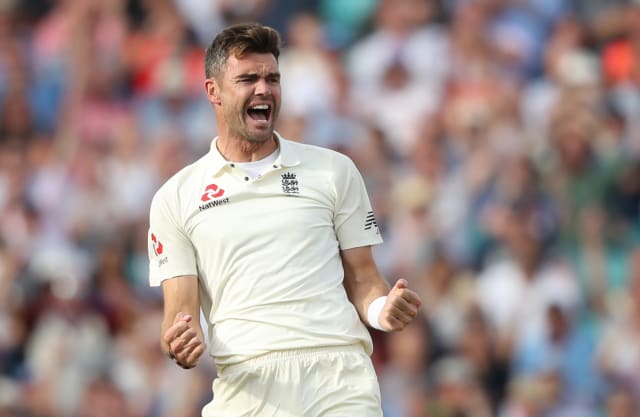 James Anderson struck with the first ball of the Boxing Day Test, with England having chosen to bowl first against South Africa.

Anderson was making history as the first specialist fast bowler to reach 150 Test caps – the 37-year-old is the ninth overall and the second Englishman after Sir Alastair Cook – and got off to the perfect start.

It was far from a perfect delivery, angled down the leg-side at a modest pace, but Proteas opener Dean Elgar followed the line and feathered a catch to wicketkeeper Jos Buttler.

Anderson and Stuart Broad did not make outstanding use of the new ball, with Aiden Markram and Zubayr Hamza putting on a confident stand of 32 before left-armer Sam Curran halted their progress.

Markram dimissively thrashed the all-rounder’s first ball for four but Curran responded well, seeing an edge off his third delivery land just in front of slip. Markram attempted to work the next ball through the on-side but contrived to pick out Jonny Bairstow at mid-wicket.

Hamza began to settle into his work as the session progressed, hitting a series of pleasing shots as he guided the total past 50, but captain Faf du Plessis needed some luck.

He was on three when he edged Jofra Archer, who lost out on new ball duties to Anderson and Broad, through the vacant third slip region.

Ben Stokes took his place in the XI, with his father Ged remaining in a stable but serious condition in hospital.

Stokes senior was admitted to intensive care in Johnnesburg after being taken ill on Monday night but he has responded well enough to treatment for England’s vice-captain to commit to the match in Centurion.

The tourists were not able to name their preferred XI, though, having lost Ollie Pope, Chris Woakes and Jack Leach to the sickness bug which has swept the camp.