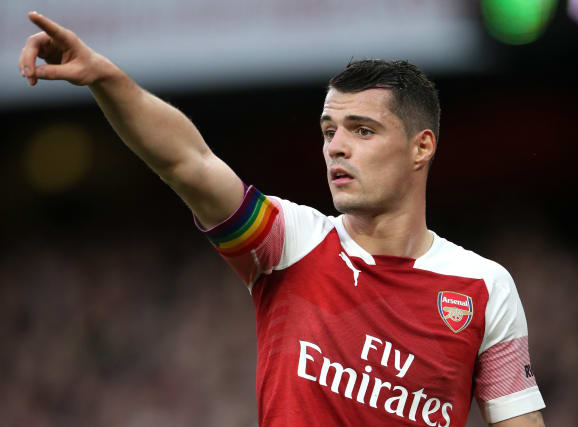 Arsenal head coach Mikel Arteta is such a big fan of midfielder Granit Xhaka he revealed that he was on a list of recommended signings he handed over to Manchester City.

Arteta, who was appointed as Unai Emery’s successor last Friday, ended his playing career with the Gunners in 2016.

Xhaka then joined during the summer but Arteta, who had taken up a coaching role under Pep Guardiola at City, was clearly impressed by the Switzerland international – whose Arsenal career appeared over after he swore at his own supporters during a game against Crystal Palace.

“As a player, when I was going from Arsenal to City to start coaching and we were looking in that position, he was one of the players on my list,” he said.

“This is how much I liked him. I was happy when Arsenal signed him because I thought he was going to be a terrific player.

“But I have been amazed as well by how this relationship is starting to come back a little bit and I think the fans have been very very positive about him, and him as well.

“Obviously it is difficult to change completely the scenario from where he was a magnificent one. But I think we are in the right direction with him.”

Arteta’s first game in charge of Arsenal will come at Bournemouth on Boxing Day and he is likely to name Xhaka in his starting line-up after speaking to the 27-year-old in recent days.

Asked if he had spoken to Xhaka about the recent incident, Arteta replied: “Yes, and I told him how much I like him and what I expect from him. How important he is for the team.

“I am here to help him, I want to tell him that we are right behind him. Not just myself but the whole club.

“If we can get the people in the right way as well, the fans with him, I think it will be helpful for the team, which is where it matters.”

Xhaka was stripped of the Arsenal captaincy following his behaviour towards the club’s fanbase and was replaced in the role by Pierre-Emerick Aubameyang.

Arteta suggested he could yet opt to hand the armband to another member of his squad but has no designs on doing so during a packed festive schedule.

“I don’t want to change everything drastically in two days,” he said.

“I want to put my feelings slowly, I want to see what is going around, and in the right moment I will make the decisions for the benefit of the team and the club.

“At the moment I don’t think it is the right time, with the amount of games coming up and the amount of things that have to be done, to change too many things.”