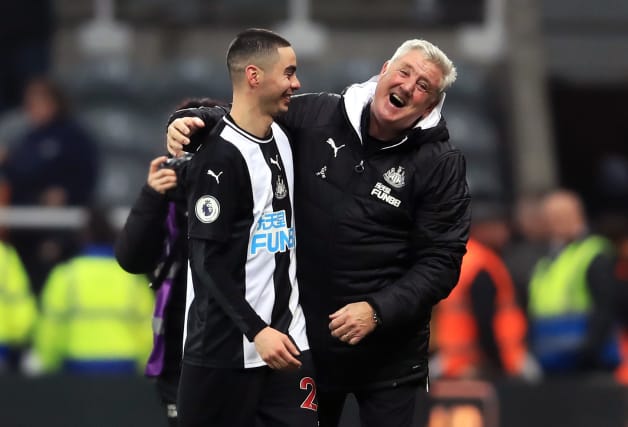 Steve Bruce has warned his Newcastle players that they have done nothing yet as they attempt to complete a Premier League double over Manchester United.

The Magpies head for Old Trafford on Boxing Day level on 25 points, three of them from a 1-0 home win over the Red Devils on October 6, the club for which Bruce played with such distinction for eight and a half years.

Saturday’s hard-fought 1-0 victory over Crystal Palace left Bruce’s men sitting in ninth place in the table, just three points shy of fifth but more importantly, 10 clear of the drop zone, although he is refusing to take anything for granted.

The head coach said: “Well look, you think you’ve done it all in the Premier League and then all of a sudden, we’ve got Manchester United, Everton and Leicester in a short period of time, difficult games.

“We haven’t done anything yet. We’ve given ourselves a nice platform, but we’re only halfway there, so we’ve got to show the same resilience and spirit that we’ve shown over the last few months and see where it takes us.”

The most recent of Newcastle’s seven league wins to date, against Southampton and Palace, have come largely courtesy of perspiration rather than inspiration, but while Bruce knows performances need to be better if they are to kick on, he cannot fault the spirit his players have shown.

He said: “I can’t fault their attitude and spirit for it because at the end of the day, we set them up and they have got to show they’re resolute, difficult to play against and difficult to beat. The way they are speaks volumes for them.”

That resilience is likely to be tested to the full by Ole Gunnar Solskjaer’s side as they attempt to bounce back from Sunday’s disappointing 2-0 defeat at bottom-of-the-table Watford with Bruce aware from personal experience what awaits visitors to Old Trafford.

He said: “They’re going through a transitional period which has probably lasted longer than anybody would have thought, three, four, five managers and now Ole’s got the job, trying to follow Sir Alex and what he achieved.

“That transitional period is difficult because it’s taken so long and it’s still going on by the looks of it. But make no mistake, they’ve still got some very, very good young players and it will only be a matter of time, in my opinion, before they’re pushing in the right away again.”