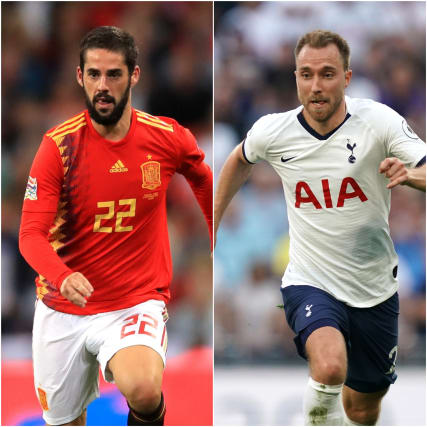 Real Madrid may be making a move for Tottenham’s ChristianEriksen who is out of contract in the summer, but the LaLiga side will need to free up space in their squad first according to the Daily Mirror. The paper reports that Isco is most likely to make way, with Chelsea offered to sign the Spain midfielder for £44million.

One player who could be moving to north London is IssaDiop, reports the Daily Express. Diop, 22, previously played at Toulouse before shifting to West Ham in 2018 and the Hammers will be looking for £50million for their centre-back.

Manchester United will be taking part in January sales, with Ole Gunnar Solskjaer looking to offload NemanjaVidic and MarcosRojo when the transfer reopens, according to the Daily Mirror.

Teenager AngelGomes may also be leaving Old Trafford with Barcelona running the rule over the attacking midfielder, the Mirror reports. Gomes, 19, was the first player born in the 2000s to play in the Premier League when he came on as an 88th minute substitute in May 2017.

As for arrivals in the north west, and Solskjaer’s side are said to be in pole position to land RB Salzburg striker ErlingHaaland despite interest from Leipzig.

Boubakary Soumare: The Lille midfielder has caught the attention of Tottenham, but Jose Mourinho’s side will have to fight off interest from Manchester United, reports L’Equipe.

Franck Kessie: Wolves are interested in signing the 23-year-old Ivory Coast midfielder, with AC Milan asking for £26million, according to Calciomercato.

Thomas Lemar: Lyon will look to boost their midfield with the signing of the Atletico Madrid and France player, says L’Equipe.