Arteta pleased with qualities he has seen in Arsenal squad 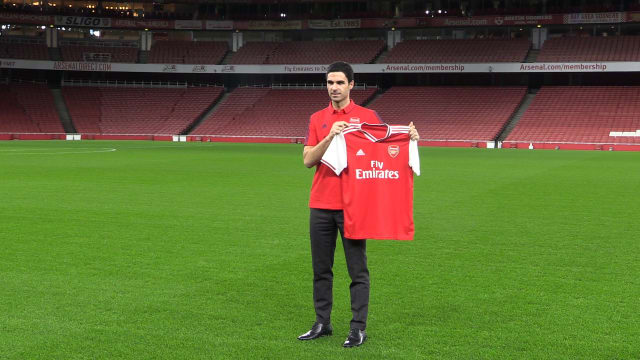 Mikel Arteta believes the principles he wants to instil in his Arsenal players were already visible in the weekend draw at Everton – even though he was only watching from the stands.

The 37-year-old Spaniard joined Arsenal as their new head coach last Friday, returning to the club where he ended his playing career in 2016.

He takes over with the Gunners having won only one of their last 13 games and sitting in the bottom-half of the Premier League.

While he was announced as the new boss before the weekend trip to Everton, interim head coach Freddie Ljungberg took the team at Goodison Park as the two sides played out a drab 0-0 draw.

Arteta – whose first game at the helm is a Boxing Day trip to Bournemouth – watched on from the stands but was pleased with what he saw from his new players.

“We are much more committed, we have a different kind of aggression every time we lose the ball,” he said.

“I think the body language was much, much better than in the past few games. I think they played with more passion in this game.

“Obviously there were things to improve but those things have to be non-negotiable.

“Those things have to be on the table in every game, every training session and the way we’re going to live together.”

Speaking at his unveiling last week, Arteta made it clear he will be a demanding and ruthless head coach and those who do not follow his ethos will be left behind.

An ex-Arsenal captain, this is his first foray into management having worked as a coach under Pep Guardiola at Manchester City after hanging up his boots in 2016 – but he insists he is enjoying the step up on his return to the Emirates Stadium.

“It’s an incredible opportunity,” he added.

“There is so much work to do, and I just try to embrace everybody here at the training ground and explain what my idea is, what I want to try to do and I need them all on board.

“Everything we have been doing in the last few days, all the talks and meetings, is to get people to jump on board with the right energy, the right idea and we need them.

“We need them to help the players and transmit what we want to do. So far I’m very happy with what I’ve seen on that.”