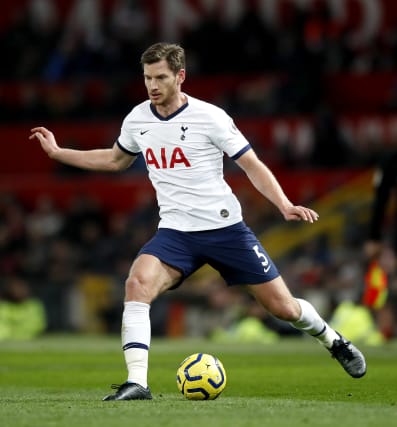 Jan Vertonghen says Tottenham do not identify with the “idiots” who allegedly chanted racist abuse at Chelsea defender Antonio Rudiger.

Germany international Rudiger claimed he was subjected to a monkey chant in the 2-0 win at Spurs and Vertonghen has apologised on behalf of his club and called on the relevant authorities to act strongly.

Rudiger complained to Blues captain Cesar Azpilicueta and referee Anthony Taylor stopped the game, with three announcements on the public address system following that said: “Racist behaviour among spectators is interfering with the game”.

It was the first time such announcements have been made at a Premier League game, making it another dark day for English football in a season that has been blighted by racist behaviour from fans.

“I didn’t hear anything, but if these things are still happening it is a disgrace and we should act strong against it,” Vertonghen said.

“I have got no idea how people still, or ever, thought this way.

“Sometimes you think people are smarter than this. I am very convinced it is just a minority, but it is very wrong.

“I don’t know if it is getting worse. It shouldn’t be there in any way. I just can’t get my head around how people still do this.

“I have got no words for it. If any of their players or our players are affected then I apologise in the name of Spurs, but they are minority idiots. We don’t identify with these people.”

Despite a growing rap sheet in this country, including an FA Cup game between Haringey and Yeovil being called off earlier this season, Vertonghen does not think the problem is worse in the UK than any other country.

He added: “The way I see it is it is still everywhere, it’s not that in different countries I have played there is nothing at all.

“I always see England as one of the countries who are ahead in the multi-cultural society.

“It is not just a problem at this stadium or in London or the UK, it is everywhere in the world and it is wrong.

“I don’t know how you fix these idiots but this is an opportunity for the right people to act strong against it.

“Not just here, not just in this country, but in Belgium, in Holland, in other countries where I watch football, it is a problem everywhere and this is another opportunity to make a statement.

“My general feeling is that in England they act strong and maybe they have to act even stronger.

“I think outside of the UK, and I am talking about UEFA and other Football Associations in European countries, they can do better.”

Chelsea forward Willian, whose two first-half goals won the festive London derby at Spurs, says that the culprits need to be banned.

“It’s a shame. I think we have to find the solution to stop this kind of thing,” he said.

“I think the people that did this to Toni have to stop coming to the stadiums, in every stadium.

“I think that – we have to find a solution to stop.

“So us, inside the pitch, we have to stay concentrated and leave the decision to the referee, and we did it.”