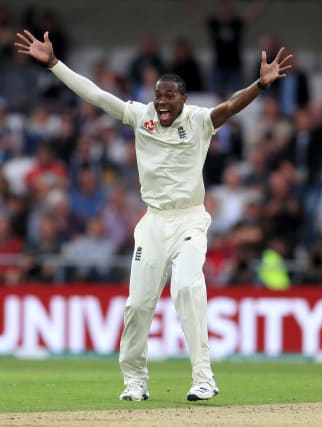 England coach Chris Silverwood admits a couple of rapid spells from the recovering Jofra Archer could be enough to put him in contention for the Boxing Day Test against South Africa.

The tourists have seen their best laid plans for the series fall foul of an illness that swept the camp and ruled Archer, Stuart Broad and Jack Leach out of both warm-up matches.

All three hit the nets on Monday, alongside Craig Overton and Dom Bess who had been called up to cover them, as Silverwood cast his eye over proceedings.

Leach is an outside bet to play, with England strongly erring towards a seam-heavy attack bolstered by occasional spinners Joe Root and Joe Denly, while Broad seems increasingly certain to take the field at Centurion.

The 33-year-old is understood to have progressed best over recent days and, with 134 caps over 12 years, is deemed a relatively low-risk selection should he declare himself ready.

All of which leaves Archer as the major question mark. The cautious approach would be to not risk a second under-prepared bowler, particularly with James Anderson also returning from a long-term injury.

But Archer matched Broad in sending down five overs at full speed in the practice session and, with England expecting SuperSport Park to be pace-friendly, it may also be a gamble to exclude a man who is capable of topping 95mph.

“We saw how he was running in and bowling fast in those nets,” said Silverwood.

“He bowled a few overs with me the day before and he just backed it up again, so if we can see a few more sessions like that then he’d throw his hat in the ring.

“Maybe there’s a little bit more caution around it, if I’m brutally honest, but more than anything its for his well-being as well.

“If he’s going out on the pitch we need to make sure he’s 100%, but equally he’s played a lot of cricket as well – albeit maybe not at Test level.

“I don’t think (it’s a gamble) as long as from a medical point of view they feel good.”

The level of risk would be reduced yet further if England do follow their instincts by omitting a specialist spinner, as they did in their previous match against New Zealand Hamilton, meaning Archer would be one of five seam options.

The fact that South Africa’s first-choice slow bowler, Keshav Maharaj, got through just 14 wicketless overs in the last Test at the ground will hardly dissuade them.

“That’s the thing that has most effect on the game here, so we’re seriously looking at that.”

Centurion is a special place for the England coach, who tasted his only Test victory in six caps on the ground. Sadly, that result in 2000 is best remembered for the fact it was tainted by Hansie Cronje’s match-fixing corruption.

“I’ve got feelings on both sides but at the same time it was a great experience for me,” added Silverwood.

“You get over it. To be honest I have good memories of playing in a Test that we won and it’s lovely to come back. It’s a great ground.”