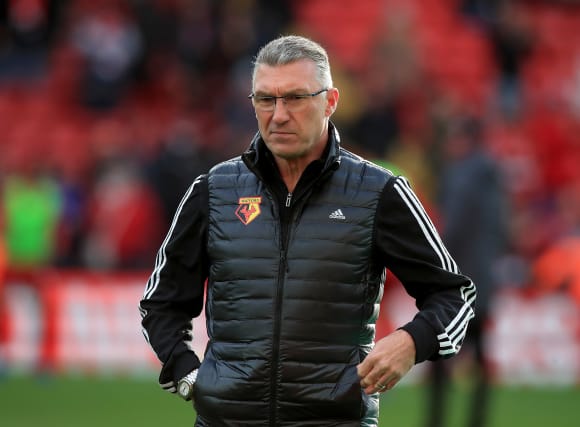 Nigel Pearson produced a great escape while in charge of Leicester in the 2014-15 Premier League season, but has not been talking to his Watford squad about that achievement.

The Hornets will be bottom at Christmas, despite Sunday’s 2-0 home win over Manchester United, and normally in the top flight that results in relegation.

Pearson was only appointed on December 6, but has already appeared to have an impact at Vicarage Road and is not bothered about his previous success in survival battles.

A run of seven wins from Leicester’s final nine matches in the 2014-15 term saw the Foxes beat the odds and avoid relegation despite being bottom on Christmas Day.

But Pearson said: “I wouldn’t imagine the players would want to hear somebody talk about another team. It is not about that.

“It is about the situation we are in here and how we find a solution to our current problem and that is we are at the bottom and we have to make ground on the sides directly above us, but we need to get momentum at some point.

“The last few performances have been encouraging, it was a big win for us yesterday, but we have some really key games coming up now as well.”

Watford have 12 points from 18 games and are six from safety ahead of Boxing Day’s trip to Sheffield United.

After that, fellow relegation rivals Aston Villa visit two days later on December 29 in what will be a crucial match in both clubs’ hopes of staying up.

Pleasingly for the Hornets they enter this hectic period following a win and with captain Troy Deeney back in the goals – he struck his first of the season on Sunday following a disjointed campaign so far after knee surgery in August.

“I think Troy will put pressure on himself,” Pearson added. “He is a talismanic figure for us and we need players within our side to go and do what they’re picked to do.

Watford will be without midfielder Abdoulaye Doucoure at Bramall Lane after he received his fifth yellow card of the Premier League season on Sunday.

“Doucoure will be suspended for the game against Sheffield United and we have a couple of players who we are monitoring in terms of having knocks – the normal stuff the day after a game,” Pearson said.

“These fixtures come very, very quickly and we will have at least one change (Doucoure), but over the next few games we will need the squad to contribute because it is quite a hectic schedule.”