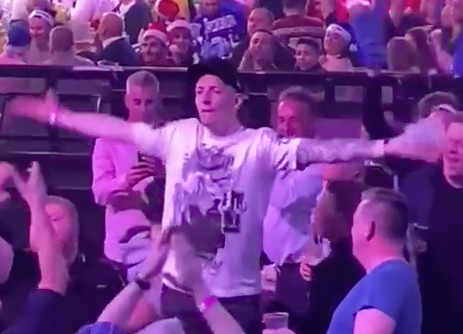 Everton footballers Jordan Pickford and Michael Keane blew off some steam at the PDC World Darts Championships at London's Alexandra Palace on Sunday, December 22, just a day after Everton drew 0-0 against Arsenal.

Footage posted to Twitter by Cambridge resident Matt Innes shows Pickford, the goalkeeper for Everton and the England national team, chugging the contents of a glass – much to the delight of onlookers cheering him on.

According to Innes, Pickford also necked a Jägermeister every time a darts player scored 180.

Elsewhere at the Alexandra Palace, Fallon Sherrock, who last week became the first woman to win a round at the competition, stunned 11th seed Mensur Suljovic on Saturday night to win her second round match 3-1, and continue her historic run at competition.