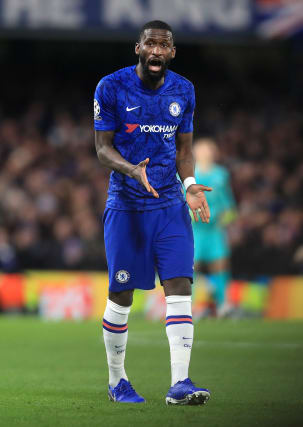 Chelsea defender Antonio Rudiger has called for anyone found to have subjected him to racist abuse to be swiftly punished – and for the fight against discrimination not to be “forgotten again in a couple of days”.

Rudiger reported being the subject of monkey chants during the second half of the 2-0 victory at Tottenham, shortly after Son Heung-min had been sent off for kicking out at him.

There were three stadium announcements saying that “racist behaviour among spectators is interfering with the game”.

The Professional Footballers’ Association has called for a government inquiry into racism within football in the wake of Sunday’s incident.

German defender Rudiger took to Twitter later in the evening, thanking people for their support, but also calling for decisive action.

“It is really sad to see racism again at a football match, but I think it’s very important to talk about it in public. If not, it will be forgotten again in a couple of days (as always),” he said.

“I don’t want to involve Tottenham as an entire club into this situation as I know that just a couple of idiots were the offenders. I got a lot of supportive messages on social media from Spurs fans as well in the last hours – thank you a lot for this.

“I really hope that the offenders will be found and punished soon, and in such a modern football ground like the Tottenham Hotspur Stadium with dozens of TV and security cameras, it must be possible to find and subsequently punish them.

“If not, then there must have been witnesses in the stadium who saw and heard the incident. It’s just such a shame that racism still exists in 2019. When will this nonsense stop?”

Former Manchester United defender Gary Neville, speaking as a pundit on Sky Sports, had earlier called on the PFA to do more in the fight against racism.

Among a series of tweets following the match, the PFA posted: “Now more than ever we must unite and stand strong and together to confront, challenge and eradicate racist abuse in our stadiums and in our country.

“We believe that the time has come for all governing bodies to unite collectively to end this abuse.

“The PFA calls for a government enquiry into racism and the rise in hate crime within football and immediate and urgent action from an All-Party Group at the Department of Culture, Media and Sport to address this urgent issue.”

Neville had also reiterated the call for direct action against racism by players walking off the pitch – and admitted he was “ashamed” not to have done so in support of former England team-mate Ashley Cole.

“Maybe we have to empower the players to walk off the pitch and stop the entertainment while it is happening. That is the only way I can see it happening.

“I did not walk off the pitch when Ashley (Cole) was abused 15 years ago, and you might argue that now it’s okay for me to sit here in my ivory tower of a commentary box and suggest that players should walk off the pitch.

“Ultimately I would be ashamed of myself for not doing (it) 15 years ago as I would be absolutely proud of players for doing it now to empower them to think, do something about it and take it into your own hands.”

Neville played in the England team with Cole – who, along with Shaun Wright-Phillips, was subjected to racist abuse during a 2004 friendly against Spain in Madrid.

“You have a T-shirt in your place (in the dressing room). They are like, ‘Put that on for the warm-up, then you can take it off’,” the 39-year-old said. “People don’t really care.”

He added: “Why do they wait until something happens in the game to make the announcements? I don’t think it is enough – and is it going to stop? It is kind of my fault as well that when I was abused I did not come out, but I just felt I didn’t have enough support.

“Raheem (Sterling) has changed that, he has the people on his side, whereas I did not feel I had that.”

Tottenham swiftly vowed to investigate the matter and take the strongest possible action against any guilty parties, with Chelsea quick to welcome their London rivals’ stance.

Anti-discrimination body Kick It Out said in a statement on Sunday evening: “We are aware of the alleged racist incidents at today’s game between Tottenham Hotspur and Chelsea.

“We applaud the action of referee Anthony Taylor in following step one of the protocol and the ensuing steps taken by Tottenham Hotspur in repeating the stadium announcements.

“We have offered our support to both of the clubs and also to Chelsea’s Antonio Rudiger.”