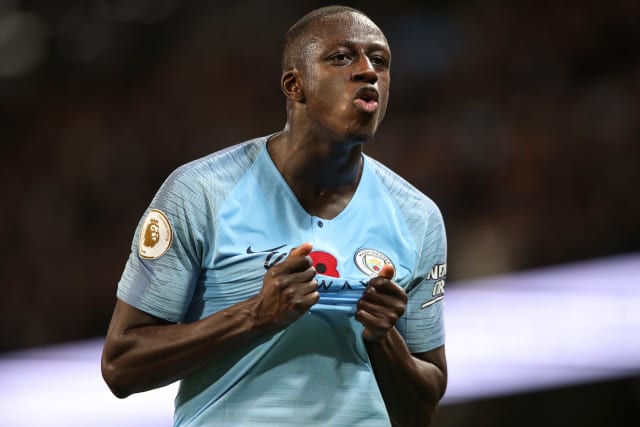 Benjamin Mendy insists Manchester City are not ready to concede the Premier League title to Liverpool just yet.

The champions remain a distant 11 points behind the runaway leaders – who also have a game in hand – despite an impressive 3-1 victory over second-placed Leicester at the Etihad Stadium on Saturday.

Jamie Vardy put the visitors ahead with a typical breakaway strike but, with Kevin De Bruyne outstanding, City roared back with goals from the similarly eye-catching Riyad Mahrez, Ilkay Gundogan and Gabriel Jesus.

City are now just one point behind the Foxes, who Mendy hopes can return to winning ways when they host newly-crowned Club World Cup champions Liverpool on Boxing Day.

Asked if Liverpool can still be caught, Mendy said: “Of course. If not we would stop playing now and give the cup to Liverpool. We need to try to fight until the end and we will see what happens.

“Leicester are a good team. They can be very difficult to play, they have great players. They are doing well, so I hope they do the same game and they win.

City’s performance was hailed by manager Pep Guardiola as one of their best of the season. Coming after last week’s comfortable 3-0 win at Arsenal, City have recovered well from their damaging derby loss to Manchester United earlier this month.

Christmas week is tough, however, with Friday evening’s clash at Wolves followed less than 48 hours later by the visit of Sheffield United.

“It is important to keep going,” said left-back Mendy. “In the Premier League we need to try to take the three points in all the games.

“Last year we lost a lot of points at this time. This year we are more focused and I think it is a very crucial moment for the league.”

Leicester had a six-point advantage over City a week ago but that has been slashed over the past two games.

Manager Brendan Rodgers must now rally his side for the visit of his former club Liverpool, who he will hope will be weary after their exertions in Qatar over the past week.

Rodgers said: “It will be a tough test for us. We have to continue fighting and working and obviously we’re at home, so we’ll have the crowd behind us, which will be great.

“It’s a great game to respond to. We didn’t play so well on Saturday and now we have a really tough game on Thursday, but again, we’re ready for that challenge.”