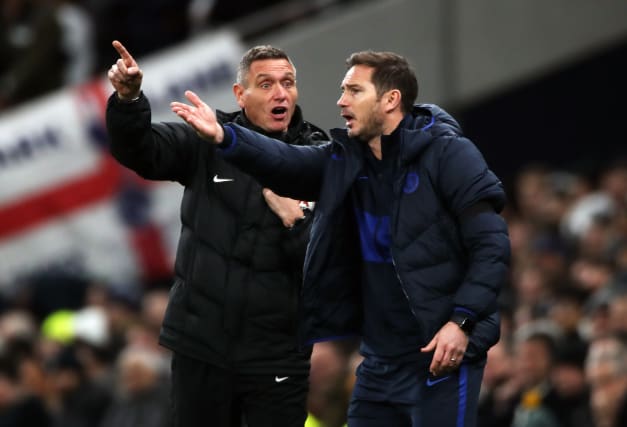 Frank Lampard insists he would be “100 per cent behind” his Chelsea players if they wanted to walk off the pitch amid any future racism storm.

Antonio Rudiger reported he was subjected to racist chanting from the stands during Chelsea’s 2-0 Premier League derby win at Tottenham.

Referee Anthony Taylor stopped the game and three announcements were made in the Tottenham Hotspur Stadium, reminding fans there is “no place for racism in the game”. Spurs have launched an investigation that could end in a stadium ban for any identified culprits.

Willian’s brace sealed Chelsea’s win with Son Heung-min sent off for the lacklustre hosts, but the match was overshadowed by events off the field.

Lampard said: “In terms of walking off the pitch, it would depend what the players were feeling and saying.

“But I would be absolutely, 100 per cent behind them and I’m sure it would be a group decision. But we’re not there yet, so it’s hypothetical to a degree.

“All I know is that Toni Rudiger said he heard some racist chanting or comments, and I haven’t had chance for an individual conversation with Toni.

If it happened and it’s fact, then punishment is needed and it needs to be strong

“Of course I’ll support Toni as we would support any of our players, or in fact any opposition players. Wherever this happens it needs to be dealt with.

“If it happened and it’s fact, then punishment is needed and it needs to be strong.”

Rudiger alleged he was racially abused in the second half, following Son’s red card for kicking out at the Germany defender.

Contact was minimal but clear on a VAR review and Tottenham boss Mourinho sarcastically told Sky Sports afterwards: “I hope that Rudiger recovers quick from the broken ribs.”

A Tottenham statement read: “We are now conducting a thorough investigation which will include liaising with Chelsea and their players for their observations.

“Any form of racism is completely unacceptable and will not be tolerated in our stadium. We take any such allegations extremely seriously and shall take the strongest possible action against any individual found to be behaving in such a way, including stadium bans.”

“I’ve not much to say apart from it’s something that saddens me,” Mourinho said.

“I didn’t want the game to be stopped, but as soon as I knew the reasons why the game was stopped I obviously understood and accepted it.

Rudiger tweeted after the game and included the hashtags #NoToRacism and #PleaseGetSomeBasicEducation.

“I was the other side of the pitch but I was aware of what happened,” he said.

“It didn’t affect his performance, he is a strong character and it showed because he is a fantastic player and overcame it.

“Everyone is doing as much as they can to make a stop for it. But there are going to be one or two people who will always remain the same.

“For us it is about staying together. As you could see, the Spurs players came to comfort Toni as well.”

“On the pitch I didn’t know what was happening, I only heard after the game,” he said.

“I think everyone is very disappointed about this and sick of it. For me there are no words to describe why so hopefully they can identify the people who did those things and punish them the right way.”