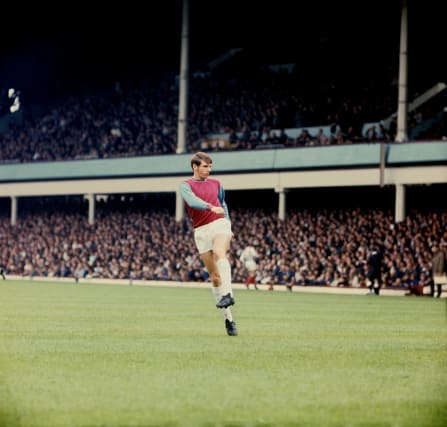 Martin Peters has been described as “a great person” and a “wonderful footballer” by his former West Ham team-mates.

Peters, the former West Ham and Tottenham midfielder who scored for England in their 1966 World Cup final win, died on Saturday morning aged 76 after a long battle against Alzheimer’s disease.

“Not only was he fantastic footballer, he was an absolute gentleman,” Harry Redknapp, who spent five years playing alongside Peters for the Hammers, told Sky Sports News.

“He was very quiet, very well-mannered, just a great person. A true legend.

“When you look back at 1966 and what those boys did for their country, winning the World Cup, it was a special day and they will be remembered for ever.

“When people talk about football they always remember the 1966 team and Martin, not only did he play, he scored a goal in that final.

“It was a great day for English football and he was a massive part of that.

“He was a very, very modest guy, quiet, very much a family man and he was a complete, all-round footballer.

“In training some days he’d go in goal and was an incredible goalkeeper he could play centre-half. He played full-back. He could play any position.”

Sir Trevor Brooking, another former club-mate of Peters in the late 1960s, said he was “a humble man” and “a wonderful footballer”.

“Martin lived locally to us and it has been difficult for the family in recent years,” Brooking told the Mail on Sunday.

“They, I am sure, will want everyone to remember Martin for what he was: a wonderful footballer, who achieved wonderful things, and a talented goalscorer.

“More than anything though, a top-class man who was great to spend time with. A humble man. That word perhaps sums him up best.

“He never looked for the plaudits but was happy to enjoy his life. And he certainly did that.”

“It was an honour to be a West Ham youngster in that unique period of the club’s life,” Brooking said. “Martin was at the heart of that.

“He was a lovely, approachable man, who always made time for people.

“He was quiet, did not look too much for the limelight. He was someone who thoroughly enjoyed being a part of that time.

“But I think it is only as each decade has gone by that we now, 50 years later, appreciate how amazing their achievement was.”

Sir Bobby Charlton, also a member of England’s World Cup-winning team, said Peters was “an opponent to be respected and admired”.

“It was with incredible sadness that Lady Norma and I heard the news about Martin,” Charlton said in a statement on Manchester United’s official website.

“Obviously, we shared one of the greatest days of our lives at Wembley in 1966 and the fact Martin is one of only two Englishman to have scored in a World Cup final gives him a special place in England’s history of the game.

“Beyond that, for West Ham and Tottenham, he was an opponent to be respected and admired.

“He was a fantastic footballer. Sir Alf Ramsey said Martin was 10 years ahead of his time with the way he played the game and there is an element of truth to that.

“But as a team-mate he was someone I could trust completely to do his job and I am proud to have shared that great day with him.”

Former England goalkeeper Peter Shilton said Peters was not only appreciated by players and fans from his own era.

“A lot of young fans know players from the 60s and 70s as well as the modern-day players, they tend to get on YouTube and watch players,” Shilton told BBC 5 Live.

“I’m sure, if anyone needs reminding of Martin’s great ability, he was an all-round midfield player, a goalscorer.

“People say he used to ghost into the box 10 years ahead of his time, I think the great Sir Alf Ramsey said, because he timed those runs into the box in an era when midfield players didn’t do that.

“He was just a great all-round player and I’m sure youngster these days will soon see that when they look at the games he played in.”