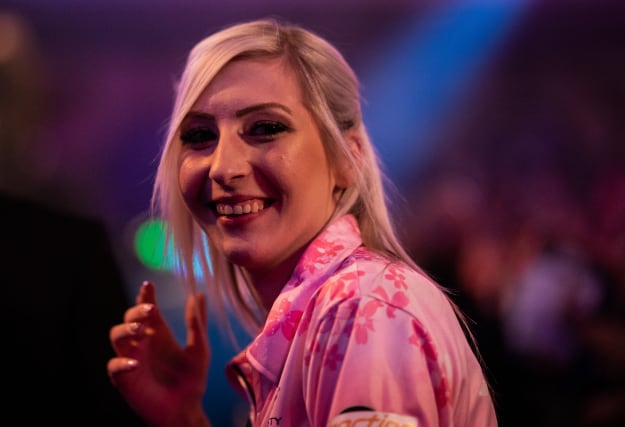 Fallon Sherrock said it was "incredible" to have her latest PDC World Darts Championship win tweeted about by Billie Jean King.

The 25-year-old, who now faces Chris Dobey on Friday, became the first woman to win a match at the tournament four days earlier by beating Ted Evetts.

"It hasn't all sunk in yet," Sherrock told BBC 5 Live. "I haven't had time to process the first game let alone this game.

"Then the fact that all these people are tweeting me, especially Billie Jean King.

"Oh my god, I never thought someone like that would be contacting me or congratulating me or anything like that.

"I mean, this is me. I'm just a normal person. This stuff doesn't happen to me, but it's incredible and I'm loving it.

When asked if she thought she could go on to win the tournament, Sherrock said: "Why not? The possibilities are endless now. Who's to say that I can't?

"I'm so looking forward to my next game and then just take each one as it comes. Who's to say I can't?"

Sherrock said she had been unaffected by nerves during her latest victory, which was sealed with a bulls-eye throw.

"I was like, 'oh my god, I've just taken out one of the best men in the world' and then the audience just went mental," she added.

"I turned round and I was in disbelief. I couldn't believe it.

"I've never felt so relaxed and so calm when I'm playing on a stage before. I'm loving it. It's brilliant."