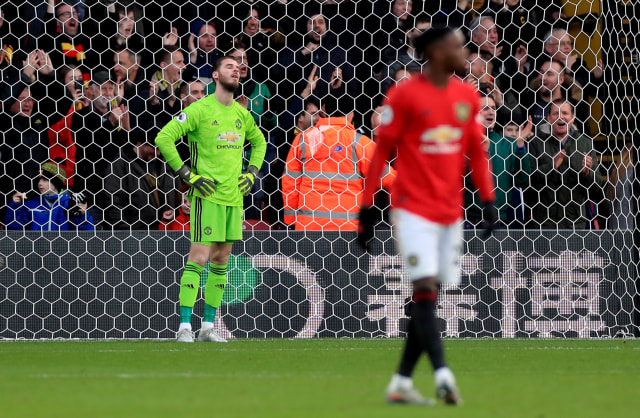 David De Gea’s howler put rock-bottom Watford on course for a remarkable result as Manchester United endured their most chastening loss of the season.

Nigel Pearson’s first home match was a free hit heading into Christmas, with the Hornets nine points off safety before kick-off and already staring down the barrel of relegation.

Yet Watford’s survival hopes received an unlikely shot in the arm on Sunday as United goalkeeper De Gea somehow let in Ismaila Sarr’s shot before Troy Deeney quickly scored a penalty foolishly given away by Aaron Wan-Bissaka in a vital 2-0 win.

Ole Gunnar Solskjaer’s side were out-fought and out-thought in Hertfordshire, where a forgettable first half was followed by a second period to remember for the Hornets.

Having shown promise in defeat at table-topping Liverpool last weekend, Pearson’s men took the lead in a league match at Vicarage Road for the first time since April as Sarr’s 50th-minute effort somehow crept past De Gea.

Wan-Bissaka’s foul on Sarr four minutes later allowed Deeney to double Watford’s lead during an extraordinary start to the second half that United were unable to find a way back into as much as Solskjaer’s stunned side tried.