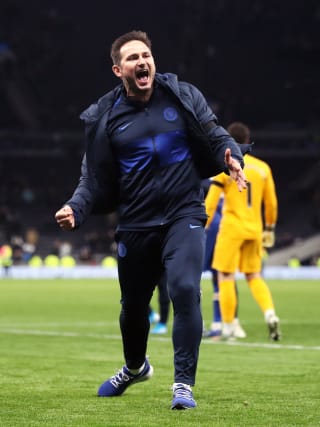 Frank Lampard again got the better of Jose Mourinho as Chelsea won 2-0 at Tottenham on Sunday but the victory was overshadowed by the alleged racist abuse of Blues defender Antonio Rudiger.

Rudiger appeared to suggest he had been the subject of monkey chants in the second half after his involvement in Son Heung-min’s red card, prompting three stadium announcements saying that “racist behaviour among spectators is interfering with the game”.

It left a cloud over a game which should have been about Lampard, who won five trophies as a Chelsea player under Mourinho, beating his former boss for the second time and ensuring the west London side will spend Christmas in the Premier League’s top four.

It was a polished display on their first visit to the Tottenham Hotspur Stadium, with Willian’s two first-half goals increasing their advantage over Spurs to six points, ending a run of four defeats in five games.

In contrast, it was an afternoon of self-destruct for Mourinho’s side, who contributed to both goals with poor individual errors while Son was dismissed after an act of petulance on Rudiger was caught by VAR.

The scenes afterwards were disgusting as the Germany international told captain Cesar Azpilicueta of the alleged abuse and the referee spoke to both managers on the touchline.

Three separate announcements over the public address system followed as the severity of the situation became apparent.

The narrative before the match, aside from master versus apprentice, had been about whether Spurs could wipe out the 12-point deficit to Chelsea which Mourinho inherited when he took over, but this was the worst performance of his tenure.

The brainless pieces of play from Serge Aurier, Paulo Gazzaniga and Son contributed to their downfall and they never looked like getting back into the game.

Having hauled themselves within touching distance of their rivals under Mourinho, it seemed like it was in the script for Spurs to overtake them.

But Chelsea clearly had not read that and, with the help of a change of formation, they were the better side from the start.

They were controlled in possession and enjoying plenty of success down the left, which is where their 12th-minute opener originated from.

Spurs right-back Aurier needlessly converted a corner and then switched off as Chelsea took it quickly, going out to Willian far too slowly, which allowed the Brazilian to take full advantage by whipping a shot into the far corner.

It was a fourth goal of the season for Willian, who was signed by Mourinho in 2013 from under the noses of his current employers who were giving him a medical.

Spurs were showing nothing of the form that had propelled them up the table, though did fashion two quickfire chances to level as Harry Kane drilled over from eight yards and then Son uncharacteristically skied an effort at the far post.

After Dele Alli and Mateo Kovacic were booked for some off-the-ball grappling, the first half ended in even more dramatic fashion.

Spurs goalkeeper Gazzaniga seemed primed to collect Willian’s long ball, but he inexplicably chose to try and kung-fu kick it, missed it completely and wiped out Marcos Alonso.

Even more bizarrely, referee Anthony Taylor awarded Spurs a free-kick, but VAR overturned the decision and Willian coolly slotted home from the spot.

Spurs could not have been much worse after the break, but any realistic hope of getting back into the game ended when Son was sent off in the 62nd minute.

The South Korean, who was fouled by Rudiger, kicked out at the Chelsea defender and VAR ruled it to be violent conduct.

The scenes afterwards represented another dark day for English football.

What followed on the pitch seemed unimportant, but Chelsea saw the game out with complete ease.