Suarez at your service as Barcelona beat Alaves 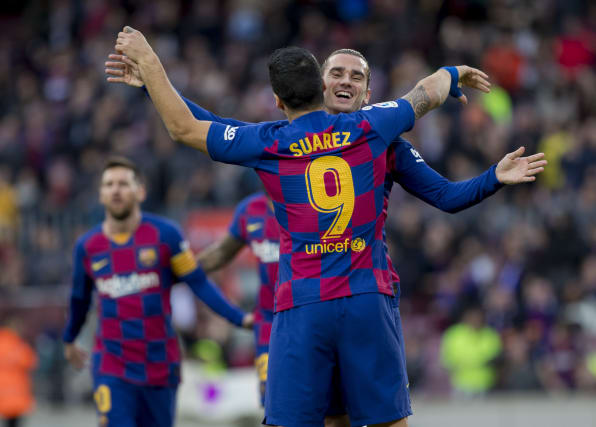 Luis Suarez provided a goal and three assists as Barcelona opened up a three-point gap at the top of LaLiga after a 4-1 victory over Alaves at Nou Camp.

The Uruguay international set up Antoine Griezmann and Arturo Vidal in the first half before assisting Lionel Messi deep into the second and adding a penalty himself after 75 minutes as Barca extended their unbeaten league run to seven matches.

Pere Pons replied for Alaves, who dropped down to 15th as a result after a four-match winless run.

The hosts began to dominate from the whistle and Vidal was unlucky as he got caught offside when set up by Messi after seven minutes.

Barca continued to press and the opener came seven minutes later as Griezmann guided Suarez’s cross into the bottom corner for his seventh league goal of the season.

Suarez had an effort blocked moments later as the home side tried to double their lead and Griezmann had appeals for a penalty turned down midway through the first half after he looked to be tripped entering the box.

Mubarak Wakaso saw his shot from the centre of the box fly past the right-hand post as Alaves looked to pull themselves level with the match approaching the half-hour mark.

Barcelona almost doubled their advantage five minutes before the break following a quick break following a corner at the other end. Griezmann backheeled the ball to Messi, who beat a number of defenders before firing just wide from close range.

The hosts were rewarded for their first-half pressure on the stroke of half-time as Suarez found
Arturo Vidal, who made no mistake in picking out the bottom corner from a narrow angle.

France striker Griezmann had an effort ruled out for offside as the second half got under way but – instead of Barca extending their lead further – Alaves reduced the deficit after 56 minutes.

Ruben Duarte provided the cross for Catalonia’s Pons to head home from the centre of the box for his second goal from two games.

Moments later, former Barcelona defender Aleix Vidal almost levelled for the visitors as he had an effort saved in the bottom-left corner by Marc-Andre Ter Stegen, while Duarte headed wide just after the hour mark.

But Barca fought back and Suarez claimed a hat-trick of assists as he provided the pass for Messi to fire home his 13 league goal this season with a powerful effort from outside the 18-yard box after 69 minutes.

Former Liverpool forward Suarez put the score beyond doubt with 15 minutes remaining as he slotted a penalty into the bottom-left corner – awarded for handball against Martin Aguirregabiria.

The home side still searched for a fifth goal and midfielder Frenkie De Jong came off the bench for the final 10 minutes as he replaced Sergio Busquets as they pressed, while Ter Stegen was tested at the other end.

Messi fired a free-kick over the crossbar as the minutes ticked down and they sealed their spot at the top of the table, most likely until the end of the year as they hold a three-point and five-goal advantage over nearest rivals Real Madrid, who play on Sunday.