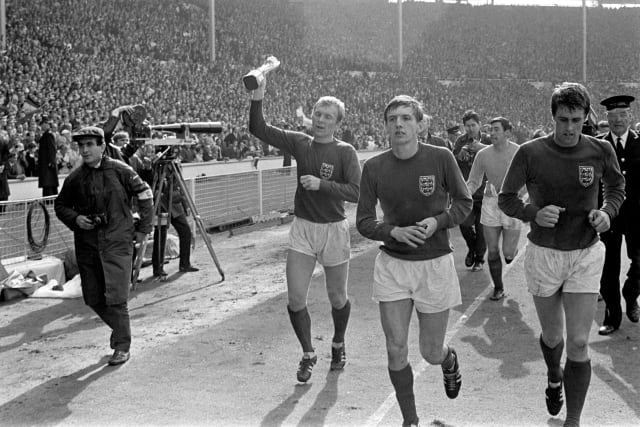 Sir Geoff Hurst has led the tributes to his World Cup-winning team-mate Martin Peters, who has died at the age of 76.

Former West Ham and Tottenham midfielder Peters, who scored England’s second goal in the 1966 final against West Germany, died in his sleep on Saturday morning following a long battle against Alzheimer’s disease.

Peters was part of the Hammers trio of captain Bobby Moore and Hurst, who scored a hat-trick in the 4-2 victory at Wembley, in Sir Alf Ramsey’s side.

Hurst wrote on Twitter: “Today is a very sad day for football and for me personally.

“Martin Peters was one of the all-time greats and a close friend and colleague of mine for in excess of 50 years.

“A fellow World cup final goalscorer and my West Ham partner for years along with Bobby Moore. RIP old friend.”

Peters came through the West Ham academy, having signed as an apprentice in 1959, and went on to help the east London club win the European Cup Winners’ Cup in 1965.

After 364 games and 100 goals, Peters left Upton Park for Tottenham in 1970, becoming Britain’s first £200,000 footballer, in a deal which saw striker Jimmy Greaves head in the opposite direction.

While at White Hart Lane, Peters helped Bill Nicholson’s team lift the League Cup at Wembley in 1971 and again, as captain, in 1973, a season after playing his part in Spurs’ UEFA Cup victory over Wolves. He went on to play for Norwich and Sheffield United.

After being awarded the MBE in 1978 and hanging up his boots in 1981, Peters regularly attended matches at Upton Park as a club ambassador.

In 2016, it was revealed Peters had been diagnosed with Alzheimer’s disease, one of several of the 1966 team to be battling dementia.

A statement from Peters’ family read: “It is with profound sadness that we announce that Martin passed away peacefully in his sleep at 4.00am this morning.

“A beloved husband, dad and granddad, and a kind, gentle and private man, we are devastated by his loss but so very proud of all that he achieved and comforted by the many happy memories we shared.

“We will be making no further comment and kindly ask that the privacy of our family is respected at this extremely difficult time.”

West Ham co-owners David Sullivan and David Gold described Peters as “one of the greatest figures” in the 125-year history of the club.

They said in a statement: “Martin represented everything that we hold dear to our heart at West Ham United – a local boy who progressed through the academy ranks, played football with class, skill and determination, and provided our supporters with a host of magical memories over the years.

“The fact that he went on to achieve the pinnacle of the beautiful game by winning the World Cup, along with his West Ham team-mates Bobby Moore and Geoff Hurst, is of course a constant source of pride for our football club and something that will never, ever be forgotten.

“In many ways, though, Martin’s greatest legacy is not the World Cup medal itself, but the example that he provides to every young player who walks through the door of our academy.

“His image already stands proudly at Chadwell Heath, alongside Bobby and Geoff, in the players’ corridor, a reminder every single day that, whatever your background and wherever you have come from, if you show dedication, commitment and a willingness to harness your talent in the right way, you can reach the very top.

“It has been tremendously sad to hear of the health battles Martin had faced in recent years. But he faced them with the same courage and dignity that he showed on the pitch throughout his long and illustrious career.

“The word ‘legend’ is used all too freely nowadays. But Martin Peters is a true legend. A legend of West Ham United. A legend of world football. And his contribution to our club and our game will never, ever be forgotten.”

Peter Shilton, a former England team-mate of Peters, described him on Twitter as “such a gentleman” and said he was “very fond of him”, while former England and Tottenham forward Gary Lineker hailed him as “a great player and a true gentleman”.

Former West Ham striker Tony Cottee told Sky Sports News: “First and foremost he was a fantastic player. I’m really sad, I knew him well, he worked for the club and I got to know him as a friend. As a West Ham man it’s really, really sad news.”

Prime Minister Boris Johnson described Peters’ death as “very sad news”, adding on Twitter: “No England fan will ever forget the heroics of Martin Peters and his fantastic teammates. My sympathies go out to all of those who knew and loved him.”

Tottenham and the Football Association also paid tribute to Peters, the fifth member of England’s World Cup winning team to have died, along with Moore, Alan Ball, Ray Wilson and Gordon Banks.