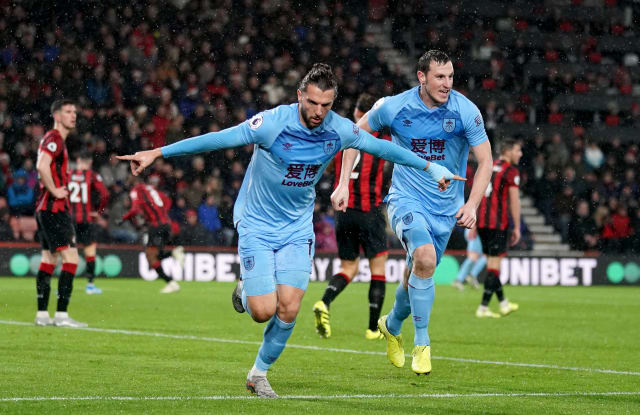 Jay Rodriguez scored a dramatic late winner as Burnley snatched a 1-0 win from a bad-tempered encounter against Bournemouth at the Vitality Stadium.

Substitute Rodriguez broke the deadlock in the 89th minute with the game’s first attempt on target, scruffily converting into the bottom right corner with his chest following Ashley Westwood’s cross.

A dismal Premier League contest on a rain-soaked south coast was littered with second-half bookings and looked set to end in stalemate before the hosts were cruelly condemned to a third successive home defeat.

Clarets striker Ashley Barnes and Cherries midfielder Phillip Billing were each fortunate to escape red cards as the match remarkably finished with 11 players on either side.

VAR opted not to intervene when Billing swung an arm at Barnes midway through the second period, while the Burnley man had avoided punishment in the early stages after a reckless high challenge on Simon Francis.

Injury-ravaged Bournemouth remain in 14th position and four points clear of the relegation zone, while Burnley climbed to 10th and are five points better off.

A forgettable first half was punctuated by a series of flash points.

Burnley began in the ascendancy against a team decimated by injuries but they were fortunate not to be reduced to 10 men inside seven minutes.

Cherries captain Francis was left writhing on the ground after being caught in the head by a dangerous challenge from Barnes. The contentious incident somehow failed to bring a card from referee Martin Atkinson or prompt VAR intervention.

With nine first-team players already sidelined, the last thing the hosts needed was to make an enforced change and centre-back Francis returned to the pitch with his wound heavily bandaged.

Burnley boss Sean Dyche was later furious following a perceived dive from Bournemouth right-back Jack Stacey near the halfway line, while home fans unimpressed by the direct play and physicality of the visitors responded with chants ‘boring, boring Burnley’ and ‘how do you watch this every week?’.

There was an increasingly fractious edge to the game, fuelled further by a robust aerial challenge from James Tarkowski which left Cherries winger Ryan Fraser bleeding after he fell face first into the turf.

Bournemouth boss Eddie Howe had initially stuck with the team which secured a much-needed 1-0 win at Chelsea last weekend. But, in search of more attacking threat, he brought on England striker Callum Wilson in place of midfielder Lewis Cook at the break.

The tetchy tone continued, with three yellow cards produced inside a minute.

Cherries left-back Diego Rico will now miss the Boxing Day clash with Arsenal after he and Barnes were booked following a dispute before a throw-in, while Dwight McNeil deservedly had his name taken for cynically bringing down the counter-attacking Stacey.

The bookings continued to flow with Bournemouth defender Francis and Burnely midfielder Jeff Hendrick cautioned, before in the 67th minute Billing survived a check for violent conduct after flooring Barnes before a corner.

The uneventful game looked send to end all-square until Rodriguez intervened with his first goal since October.

Westwood swung the ball in from the right and the 75th-minute replacement, on in place of Barnes, rose above Francis to unconventionally direct the ball beyond Aaron Ramsdale to the delight of the travelling fans.