Mourinho confident Tottenham will reap the rewards from week of training 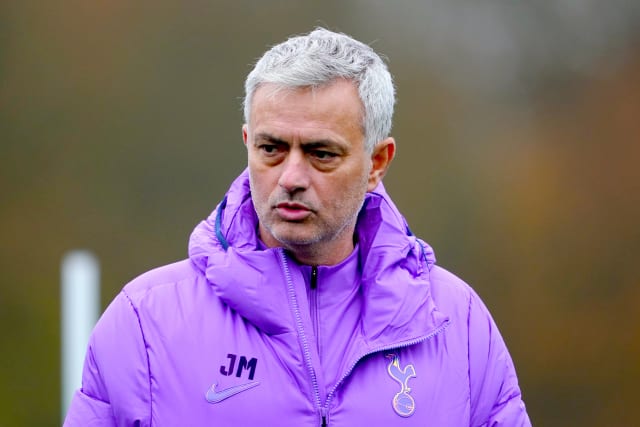 Tottenham boss Jose Mourinho hopes he will see the benefits of a full week on the training ground when his side play Chelsea on Sunday.

Mourinho has had a hectic start to life at Spurs, playing seven games in a month, including three midweek fixtures.

With Spurs out of the Carabao Cup, this week has given Mourinho a first real opportunity to get into his players on the training pitch.

“The matches are what’s bringing us to do the correct things, to do mistakes, analyse the mistakes, to go over the mistakes which of course we did since I arrived.

“Another thing is to have a training week to work so I would be disappointed if the team doesn’t answer well to the quality they gave me because they gave me lots of quality and commitment, and desire in this week of work.

“When I say ideas I say obviously the tactical ideas, but one thing is to do it with lower intensity because you played yesterday or you play tomorrow.

“The intensity of the ideas has been different because we always try to bring the ideas to the training pitch.

“In this moment, in this week was the first week where we managed to do it also using the physical adaptations and we work at the intensity we like to work at which is an intensity very, very high because this is the way we try to play either defensively or offensively.”

Meanwhile, Mourinho has revealed that skipper Hugo Lloris will be out until February.

Lloris is recovering from a dislocated elbow suffered in October, which eventually needed surgery, and is still some way from fitness.

“He’s a champion. Not just a champion of the world but also a champion as a professional,” Mourinho said.

“(He) works very, very hard, very brave, accelerates processes, but there are limits of that acceleration of process with such an important injury.

“But he’s doing amazingly well. He’s working with a different group of people, since the physios, until the goalkeeping coaches, working really, really hard.

“It’s difficult to set up a date, I would say February. I probably would not be far from it and February goes from the first to the 29th this year.”