Martin Peters: The World Cup hero who was 10 years ahead of his time 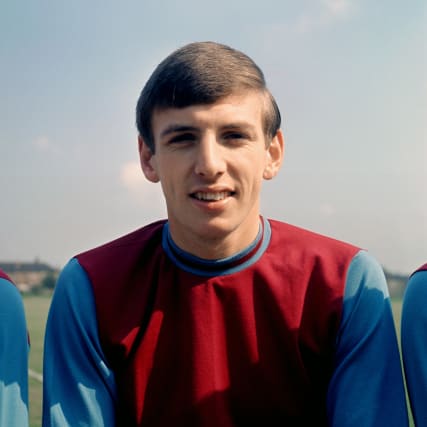 Part of the West Ham trio which helped England win the 1966 World Cup, Martin Peters was never one to seek the limelight.

Peters, who has died aged 76 following a battle with Alzheimer's, was the scorer of England's second goal at Wembley before fellow Hammer Geoff Hurst took centre stage with a hat-trick.

Indeed, it was very nearly Peters, on only his eighth appearance for his country, who had the honour of netting the winner after rifling home a deflected Hurst shot to put the hosts 2-1 up in the 78th minute. West Germany equalised in the last minute and Hurst went on score twice more in extra-time.

As the players walked up the 39 steps and England and West Ham captain Bobby Moore was presented with the Jules Rimet Trophy, Peters took a moment to wipe his hands on his shorts before meeting the Queen, not wanting to risk getting any mud on her Majesty's pristine white gloves.

A silver-service banquet for Alf Ramsey's triumphant squad followed at the Royal Garden Hotel in Kensington.

But, after the formalities were over, rather than heading off to hit the capital's trendy nightspots, Peters instead had a quiet cup of tea with his wife Kathleen, whom he had first met at a Dagenham bowling alley when they were teenagers.

Just as on the field, Peters was happy for others to enjoy their moment of glory, content in the knowledge it was one he had helped to create.

Often regarded as the complete midfielder, Peters was good in the air, able to cross with either foot and possessed great movement, being able to drift into goal-scoring positions unnoticed by his markers which would later see him nicknamed 'The Ghost'.

Ramsey once said of him: "Martin Peters is 10 years ahead of his time in the game."

The son of a lighterman on the River Thames, Peters was born on November 8, 1943, in Plaistow, east London, close enough to walk to the Boleyn Ground, before the family moved out to Dagenham in Essex.

A young Peters started out his football career in goal before being shifted around the side and flourishing in a midfield role.

Signing as an apprentice in 1959, Peters came through the fabled West Ham academy to make his senior debut against Cardiff on Good Friday 1962, initially as a wing-half – and, in only his third game, had to go in goal following injury to Brian Rhodes.

The season before England's World Cup triumph, Peters had been part of the West Ham side which won the 1965 European Cup Winners' Cup against 1860 Munich at Wembley.

An international debut, though, did not come until May of 1966, just two months before Peters would enshrine himself in English footballing folklore forever.

After 364 games and 100 goals for the Irons, in 1970 Peters left Upton Park for Tottenham, becoming Britain's first £200,000 footballer, in a deal which saw striker Jimmy Greaves head in the opposite direction.

While at White Hart Lane, Peters helped Bill Nicholson's team lift the League Cup at Wembley in 1971 and again, as captain, in 1973, a season after playing his part in Spurs' UEFA Cup victory over Wolves.

He played at the 1970 World Cup in Mexico, scoring the goal which put England 2-0 ahead in their quarter-final against West Germany. He was substituted after 81 minutes, with England still leading 2-1, and could only watch as West Germany went on to win 3-2 in extra-time.

By the time of the 1974 campaign, Peters had also been installed as England skipper, but was unable to drag Ramsey's team through qualification, with their hopes ended by a 1-1 draw against Poland.

A final England appearance came in May 1974, a 2-0 defeat against Scotland. Peters won a total of 67 caps and scored 20 goals.

At the age of 31, Norwich presented Peters with a chance to start afresh, the popular midfielder helping guide the Canaries to promotion from the old Second Division. He was named player of the season for 1975/76 and again in 1976/77.

After a spell at Third Division Sheffield United in 1980, where he would also have a brief stint as manager, Peters returned to Norfolk to play at non-league Gorleston.

Off the field, Peters was honoured with an MBE in 1978.

While it seems improbable now in the world of multi-millionare footballers, the humble surroundings of a holiday park in Great Yarmouth was where Peters took up his first job out of the game, coaching children.

The Peters family, though, were soon back in Essex after close friend Hurst helped organise a job with a car warranty firm.

Peters, who sold his World Cup memorabilia to West Ham in 2001, was a regular figure at both White Hart Lane and Upton Park, where he carried out a role as match-day host, as well as being active on the after-dinner speaking circuit.

In 2016, it was revealed Peters had been diagnosed with Alzheimer's disease, one of several of the 1966 World Cup team to be battling dementia.

He is survived by wife Kathleen, daughter Leeann and son Grant.