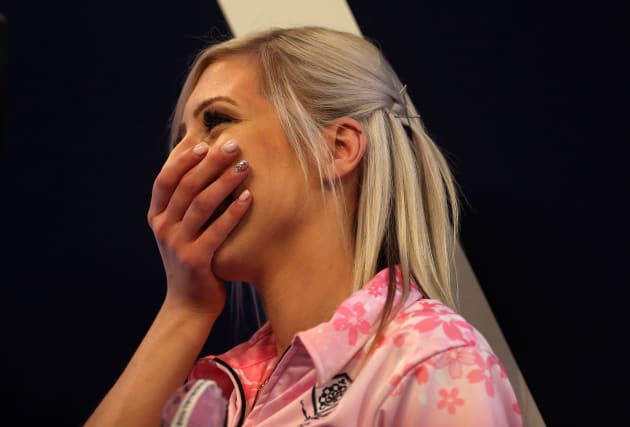 Four days after becoming the first woman to win a match at the PDC World Darts Championship, the 25-year-old upset the odds again as she delivered a 3-1 win to reach round three.

Asked if she could go all the way in the tournament, Sherrock told Sky Sports: “Why not? I have won two games, I am just going to take each game as it comes but there is nothing to say that I can’t.

“I have just proved that we (women) can beat anyone. I have beaten two of the best players in the world. If that doesn’t show that women can play darts, I don’t know what does.”

Sherrock endured a torrid start as she lost the opening two legs to the former Champions League winner, but fired back with the help of a 131 check-out as she grabbed the initiative by taking the first set.

It was Suljovic’s turn to hit back from two legs down to take the next set, defying the boos of the crowd as he did so, but Sherrock’s sharp finishing ultimately made the difference in the second half of the contest.

From 2-0 down in the third, Sherrock pulled back to 2-1 then started the following leg with two successive 180s to raise hopes of yet another history-making moment on the famous stage.

Sherrock fell short but recovered her poise to deliver an 11-dart leg which paved the way for her to reclaim her one-set advantage.

Suljovic was still scoring the heavier of the two but was desperately let down on his doubles, which allowed Sherrock to check-out on 68 to move within one leg of victory.

Once again Sherrock produced a nerveless performance to seize her chance, completing a match-winning 86 check-out with her first attempt at the bullseye.

Sherrock added: “I definitely think my finishing was spot-on – with everything that’s been going on in the last couple of days I’ve just been focusing on my finishing because I know I can score.

“I knew if I could just keep up with the scoring and he gives me a shot, I’ve just got to take it.

“I was like, I’ve actually hit bull. It was amazing. When it went in it was a sigh of relief because I was just thinking, don’t let it go to a last set.”

Lewis came within one dart of a nine-dart finish as he fought back to take a 3-2 victory and book a third round meeting with Darren Webster.

In the evening session, former BDO champion Glen Durrant hit a 170 finish as he eased past Damon Heta 3-0, and he will next face Daryl Gurney, who won by the same score against Justin Pipe.