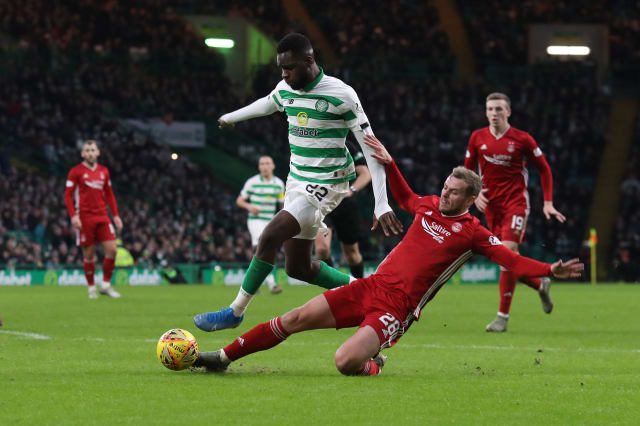 Odsonne Edouard hit a second-half winner as Celtic regained their five-point lead in the Ladbrokes Premiership with a 2-1 victory over Aberdeen.

Edouard produced a smart finish in the 66th minute after the introduction of Mikey Johnston and resulting reshuffle of Celtic’s attacking line-up had given them fresh impetus.

Aberdeen striker Sam Cosgrove was sent off for a challenge on Kristoffer Ajer three minutes later after earlier heading his 20th goal of the season to cancel out Christopher Jullien’s seventh-minute opener.

It was Aberdeen’s only effort on target while Celtic almost paid for failing to capitalise on their dominance – they had 28 efforts on goal and 11 on target. The Dons back four defended their box well but the hosts were also guilty of over-playing at times.

The pattern of play emerged early on and Jullien diverted Ryan Christie’s corner against the bar before succeeding from the same source four minutes later. The Frenchman beat Ash Taylor to the delivery and volleyed a shot off the ground and into the top corner.

The champions largely pinned Aberdeen back as they went for a second. Joe Lewis pushed away Edouard’s drive after the striker turned Taylor on the edge of box and also made more routine saves from Scott Brown and James Forrest.

Chrstie shot just wide after Forrest’s run was halted and Edouard had a shot deflected wide from Boli Bolingoli’s cutback.

Aberdeen had forced a couple of set-pieces in the final third but their equaliser came out of the blue. Niall McGinn hung up a cross to the back post and Cosgrove got above Ajer to head into the top corner from six yards.

Celtic sprang back into life and appealed strongly for a penalty when Edouard went down over the sliding legs of James Wilson, but the Aberdeen forward appeared to have touched the ball and referee Euan Anderson waved play on.

The hosts had a great chance to go back in front before the break but Edouard hesitated after being played through by Forrest’s return pass and Shay Logan nicked the ball away from his feet.

Lewis saved from Forrest after more intricate play but Celtic were not getting far in the opening stages of the second half and manager Neil Lennon made a change on the hour mark. Left-winger Johnston replaced Olivier Ntcham, allowing Forrest to switch to the right flank and Christie to take up a central role.

Johnston and Christie both had shots saved before Celtic opened the Dons up. Ajer stepped out of defence before Christie threaded the ball through for Edouard, who swiftly dispatched a shot just inside the post.

Aberdeen’s chances soon fell apart. Ajer had just made a risky but perfect sliding challenge on Jon Gallagher in his own box before keeping the ball in play. Cosgrove sprinted over and threw himself into a tackle, getting the ball but catching the Norwegian on the follow-through.

The challenge sparked an angry reaction with Brown running 20 yards to remonstrate, and Anderson was soon on the scene to show a straight red card. Cosgrove and Brown continued to clash as the Dons striker walked off.

Forrest, Christie and Jeremie Frimpong missed the target before the latter handed the visitors a chance to take their second shot by conceding a free-kick on the edge of the box. McGinn hit the effort too high.