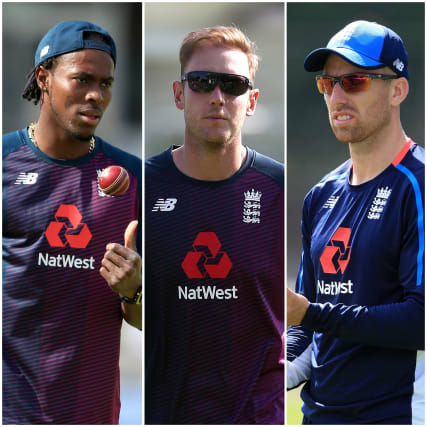 Stuart Broad, Jofra Archer and Jack Leach all made a tentative return to the nets after Ollie Pope smashed 132 on day two of England’s final warm-up match against South Africa A.

The trio have been floored by a flu-like illness over the past week and their inability to take the field has thrown preparations for the Boxing Day Test in Centurion up in the air.

They have been quarantined from the rest of the group to minimise risk of the problem spreading but arrived in Benoni midway through Saturday’s play, while their team-mates were fielding.

Pace bowlers Archer and Broad looked distinctly under the weather as they arrived at Willowmoore Park but managed 10 minutes of bowling in draining afternoon heat. Both men later returned to bat, while left-arm spinner Leach took part in a slightly extended bowling session.

They remain eligible to play some part on Sunday, their last chance to bank important time in the middle, but England have been cautious thus far and will only allow them to feature if they are deemed both ready and non-contagious.

Broad and Archer would certainly be in the first-choice XI on December 26, but, whether England feel comfortable sending both men into a five-day match, alongside the recently injured James Anderson, remains to be seen.

On the pitch the day belonged to Pope, who converted his overnight 70 into a first ton for England by piling on 62 runs in just 58 deliveries.

He will head to Centurion on firm footing but admitted there was still uncertainty in the camp about whether the absent bowlers would be available to turn their arms over on Sunday.

“It’s been a bit of a strange game, we didn’t know how it was going to pan out – when the boys are back fit or if they’ll be able to bowl tomorrow or not,” he said.

“I wouldn’t say it’s been disruptive at all, the boys who are fit and well have been able to get on with their training and prepare really well for the first Test.

“I think they’re all on the mend and hopefully they’ll be ready when it comes around.”

Pope was fresh off a highly accomplished knock, comprising 22 boundaries and two sixes, and heads into the series buoyed by a first three-figure score for his country.

“I’ve got close a few times in warm-up games so it was a good feeling getting the first one out of the way,” he said.

“If it was in the first Test it would be even nicer,but this is about preparing for the Test and I felt really good in the middle. I’ve got runs under my belt and it’s all about getting ready now.”

He was dropped once, at slip on 76, but that was par for the course as South Africa A took their tally of missed chances in the innings to seven. Jos Buttler (32) was also grassed at midwicket and Jonny Bairstow’s loopy top-edge went inexplicably unclaimed by either wicketkeeper or slip.

Captain Joe Root declared as soon as Pope holed out looking to clear the ropes, with a hefty score of 456 for seven.

Attention duly turned back to the bowling attack, with the hosts moving to 154 for two either side of a long break for bad weather.

James Anderson landed the first blow in his fifth over, snagging Reeza Hendricks’ outside edge with Ben Stokes holding on.

Stokes grabbed England’s second wicket, bowling Pieter Malan for 34, but Chris Woakes and Sam Curran could not make a breakthrough. Leg-spinner Matt Parkinson had a difficult time against an Invitational XI earlier in the week, when he went at 5.6 an over, but was much tighter this time.