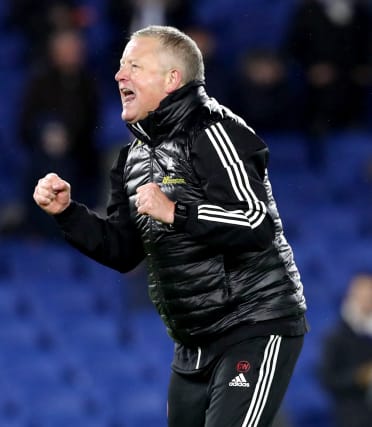 Sheffield United boss Chris Wilder revealed he had a hunch that Brighton was the right game to give Oli McBurnie a start.

McBurnie showed his strength and finishing prowess to capitalise on a defensive blunder to pounce in the 23rd minute of a 1-0 victory at the Amex Stadium that claimed a third consecutive Premier League win for the Blades.

The Scotland striker, who has appeared off the bench for the last three games, scored against United twice last season when he was at Swansea working under current Brighton boss Graham Potter.

“We watched Oli last year when he was playing for Graham Potter and he was excellent. We had two really tight games with Swansea,” Wilder said.

“We had a hunch that this would be a good day for Oli. He’s been knocking on the door during the week which is something that we always look at – away from the light Monday to Friday.

“We just felt this was the right time, against his old manager and the way they set up. It was a great goal in a tight game.

“We were disappointing with the ball, we weren’t at our best in possession. You have those days.”

Potter was frustrated at how easily the goal was conceded in a game that saw United have two goals disallowed by VAR, but had no complaint with the result.

“I know Oli’s quality and I know he’s capable of scoring. It was nice for him but not nice for us,” Potter said.

“I wish him well in the rest of his career because he’s a good lad and was great for a year at Swansea.

“It was a poor goal. It’s as route one as you can get and you need to deal with it, but we didn’t.

“As a collective we need to take responsibility and hold our hands up and that includes me because we weren’t good enough. We need to dust ourselves down and stick together.

“Credit to Sheffield United, they did what they did well and they did it better than us. They always ask you a question and are always in the game.

“We weren’t at our best, clearly. We struggled and struggled to find a way through. It was a tough afternoon for us.

“We huffed and puffed and we tried – it wasn’t because of a lack of trying – but at the same time we weren’t good enough, it’s as simple as that.

“I want to be honest and say and we weren’t good, but I also want to say Sheffield United were good. Congratulations to them, they deserved to win.”