Mikel Arteta ready for challenge after ‘coming home’ to Arsenal 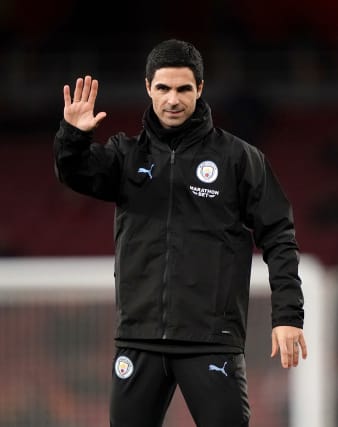 Mikel Arteta is ready for the challenge after returning “home” to Arsenal as their new head coach.

The 37-year-old Spaniard, a former Gunners captain, has left his role as assistant to Pep Guardiola at Manchester City to agree a three-and-a-half-year contract to succeed Unai Emery, who was sacked last month.

At his unveiling late on Friday afternoon at the Emirates Stadium, Arteta said: “I feel back home. I am extremely happy and proud to have been given the honour of being manager of this football club.

“I have prepared for the challenge and am ready. If I didn’t feel that, I would not be siting in this chair.

“I have to engage the players, when I was here with Man City (for last Sunday’s Premier League match) everyone was a bit down.

“We have to have the right culture here. If we don’t then the tree will shake.

“After that we can talk about other things. We need an immediate impact and need to raise the level of the performances to start winning games and engage with the fans.”

Arteta cited his former boss, City manager Guardiola, as an influence as he set out what is required at Arsenal.

“What I have learned mostly is you have to be ruthless, consistent and fit the culture of the club to sustain a winning mentality,” he said.

“Every act is important. Pep’s work-rate is incredible. The staff have to be able to transmit it and when (the players) buy into that, you can be strong.”

Arteta played more than 100 times for Arsenal – his final club before retiring. He joined City’s coaching staff in 2016 and will now embark on his first managerial post at his old club.

Sunday’s 3-0 defeat to City increased the need for the Gunners to end the uncertainty over the manager’s position, leaving the club as close to the relegation zone as they are to the top four.

Interim head coach Freddie Ljungberg replaced Emery but won just one of his four league games at the helm, while the club are on a run of only one win from their last 12 fixtures.

When Arteta’s old side City beat Arsenal at the weekend, the former Everton midfielder was in the dugout alongside Guardiola.

Arteta revealed he came “very close” to the Arsenal job following Arsene Wenger’s departure in 2018, but said it was not the right time for him to take it on.

The Spaniard added: “I want to do things my way by convincing them it is the right way for everybody to live better.

“Everybody has to be responsible and I do not want them hiding, I want people who deliver passion and energy.

“Anyone who does not buy into this, has a negative effect, is not good enough for this environment and culture.”

Arteta accepted his inexperience could be a problem for some fans, but said: “I will give every drop of blood for this football club to make it better.”

He also insisted Mesut Ozil was still “a massive player for this football club”.

Head of football Raul Sanllehi said the club had interviewed other names before opting to pursue Arteta.

“We met several top-class candidates and Mikel stood out to every single one of us as the perfect person for us,” he said in a club statement.

“Mikel understands Arsenal Football Club and what it means to our fans around the world. We look forward to him getting down to work and bringing the best out of our squad as we work to get our season back on track.”

The PA news agency understands negotiations regarding compensation between City and the Gunners saw proceedings extend into Friday before Arteta was eventually confirmed.

He will watch on from the stands on Saturday when Arsenal visit his old club Everton as Ljunbgerg once again takes the team.

It remains to be seen who will be appointed to Arteta’s backroom staff and it is unclear if Ljungberg will drop back down to an assistant’s role or leave the club.