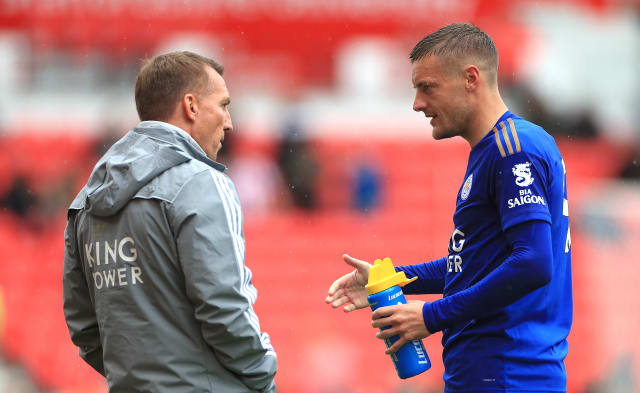 Jamie Vardy has been told to expect a game off during what Leicester manager Brendan Rodgers has described as a “nonsense” festive schedule.

Leicester face an 8pm kick-off on Boxing Day for their top-of-the-Premier League clash with Liverpool at the King Power Stadium, and then go again 45.5 hours later when they visit West Ham.

Only Wolves have a shorter turnaround time – at 44 hours and 45 minutes – in between matches just after Christmas.

The Foxes then complete four games in 10 days with a trip to Newcastle on New Year’s Day, before hosting Wigan in the FA Cup on January 4.

“The game is about money now,” said Rodgers. “You can’t say it’s about the welfare of players.

“We’re playing at 8 o’clock on the 26th, and then on the 28th we are playing at 5.30pm. You can manage that if then somewhere there is leeway for the players.

“We’ll then have a busy January (with Leicester reaching the Carabao Cup semi-finals), which is brilliant, that’s what you want. You want to succeed and play lots of games, but the players aren’t robots. It’s not a computer game.”

Asked whether the Premier League’s leading scorer Vardy, at 32, could cope with the demands of such a schedule, despite his importance to the team with 16 goals this season, Rodgers replied: “No chance.”

Appreciating he will have to rotate his squad, Rodgers added: “You cannot risk the fitness of a player.

“You play on the 26th, a high-intensity game against Liverpool, fighting for the result. In football, it’s the second day where the players suffer.

“You get that first day of recovery but it’s the second day where it’s really tough for a player. If we go along that route then the second day, instead of recovering, we’re kicking off at 5.30pm at West Ham. It’s just nonsense really.

“The players understand where we’re at. This is where our squad really comes into it. We can’t have the same team playing every single game, because we want to keep the energy in the team as much as we can.”

Rodgers also criticised the so-called winter ‘break’, with each team getting a weekend off in early February.

“It’s a ‘Let’s pretend to have a break’,” bemoaned Rodgers, whose second-placed side bid to close the 10-point gap to Liverpool when they visit third-placed Manchester City on Saturday.

“When I was in Scotland (with Celtic), they do it properly. You play a game on New Year’s Eve, and then you have a three-week break.

“You have a week to recover, the second week to maybe do some training with your team, and the third for getting ready. The players are then refreshed.

“I don’t think this is that at all. It’s certainly not a mid-season break. This year they’ve wanted to do it, and they’ve had a little play at it. Hopefully next season they can do a proper break.”