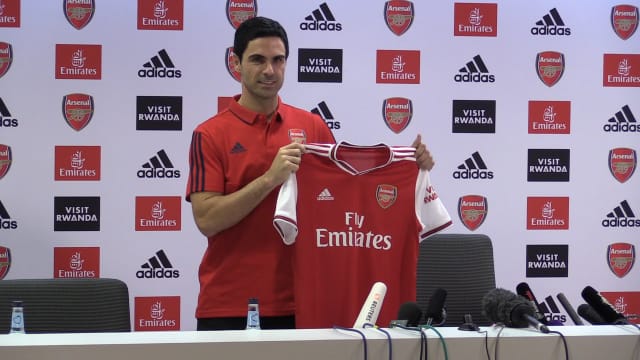 New Arsenal head coach Mikel Arteta is ready to channel the ruthlessness he witnessed under Pep Guardiola as he sets out to whip the Gunners into shape.

The 37-year-old left the backroom staff at Manchester City on Friday to take the managerial job at the Emirates Stadium on a three-and-a-half year deal.

He replaces Unai Emery, who was sacked three weeks ago after 18 months in charge, but will not be in the dugout for Saturday’s Premier League trip to Everton.

Interim boss Freddie Ljungberg will take charge of the game at Goodison Park – with Everton also reportedly closing in on appointing their own new manager as Carlo Ancelotti edges closer to the job.

Arteta will fully gets hold of the reins at Bournemouth on Boxing Day as he prepares to begin his managerial career at a club he served as captain during a five-year stint that ended with his retirement in 2016.

While the Spaniard has never experienced life in the top job, he enjoyed a growing reputation as a fine coach under Guardiola at City.

“But for me, the secret is that the people, the players and the staff, have to believe what they’re trying to deliver.

“You have to be able to transmit it, and people will buy into that. When you do that, then you are a team and everybody’s together and united you’re stronger.”

Arteta may have to show that ruthlessness sooner rather than later having been tasked with overturning the fortunes of a Gunners side which has won just one of their last 12 games – and has already explained the expectations he has of his new squad.

“The first thing is a little bit to change the energy,” he said following his appointment.

“I have to try and convince the players about what I want to do, how I want to do it, they have to start accepting a different process, a different way of thinking, and I want to get all the staff and everybody at the club with the same mindset.

“So my job is to convince everybody that this is how we are going to live, and if you are going to be part of this organisation it has to be in these terms and in this way.

“I think a lot of external things happened over the past few months that obviously has a knock-on effect on the team, on their relationships and the perception people have on them as a team, how together or not together they are.

“They have to be so united, that dressing room is untouchable. It is first of all about how they live and some respect issues that have to be addressed but when that happens, after its consequence – if they want to follow that they are in, if not they are out.”