How Jose Mourinho has fared against his former clubs 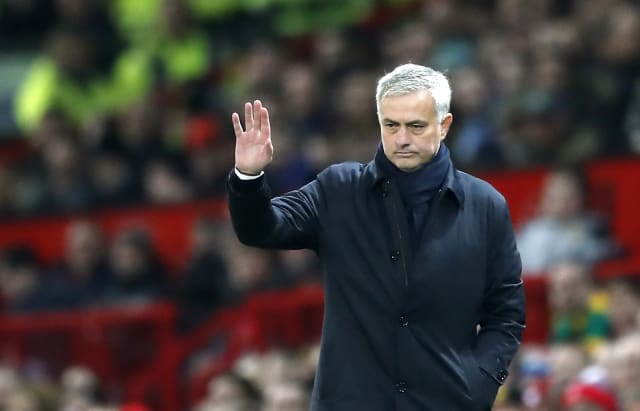 Jose Mourinho comes up against Chelsea for the first time as Tottenham manager on Sunday in a Premier League festive blockbuster.

Mourinho is part of Stamford Bridge folklore having delivered six trophies, including three league titles, across two spells at the club.

Here, the PA news agency examines how the Portuguese has fared against his previous clubs.

Three years after leaving Chelsea for the first time, Mourinho’s Inter Milan were paired against them in the Champions League last 16. Goals from Diego Milito and Esteban Cambiasso, either side of Salomon Kalou’s leveller, gave the Italians a first-leg home win in the San Siro. Then Mourinho put on a defensive masterclass on his first return to Stamford Bridge, keeping Chelsea at bay and then sealing a 1-0 win on the night thanks to a late Samuel Eto’o strike. Mourinho was muted in his celebrations in west London, but was far more brash when his side lifted the Champions League in Madrid later that season.

Mourinho’s first return to Stamford Bridge following his second sacking 12 months earlier could not have gone much worse as his new Manchester United side were battered. Pedro’s first-minute opener set the tone and then goals from Gary Cahill, Eden Hazard and N’Golo Kante made it an afternoon to forget for Mourinho.

It was a quickfire return for Mourinho’s Man Utd in the FA Cup quarter-final and it was an unsavoury night. The Portuguese was involved in a touchline spat with Antonio Conte and was abused by home fans as United, reduced to 10 men, were beaten by Kante’s second-half goal.

There was finally something to cheer as United dented Chelsea’s title hopes with a win at Old Trafford. Goals from Marcus Rashford and Anders Herrera gave Mourinho’s men a deserved win, with Chelsea’s lead at the top of the table being cut to four points.

Another visit to Stamford Bridge, another defeat for Mourinho. This time his side were outplayed by Conte’s men and succumbed to Alvaro Morata’s second-half goal as Chelsea moved to within a point United.

United moved back into second position in the Premier League with a home victory. They fell behind to Willian’s strike, but goals from Romelu Lukaku and Jesse Lingard earned Mourinho’s men the three points.

Mourinho endured a rare season without a trophy as his former side won the FA Cup in a turgid Wembley final. Eden Hazard’s first-half penalty decided the match as United missed several chances to equalise.

With the clock ticking on Mourinho’s spell at Manchester United, this Stamford Bridge return was symptomatic of his time at United in a fiery match that saw more touchline scrapping. After Anthony Martial’s double overturned Antonio Rudiger’s opener, Mourinho was denied victory by Ross Barkley’s goal in the sixth minute of injury time. Mourinho was goaded by a member of the opposition dugout and tempers flared. He left United two months later.