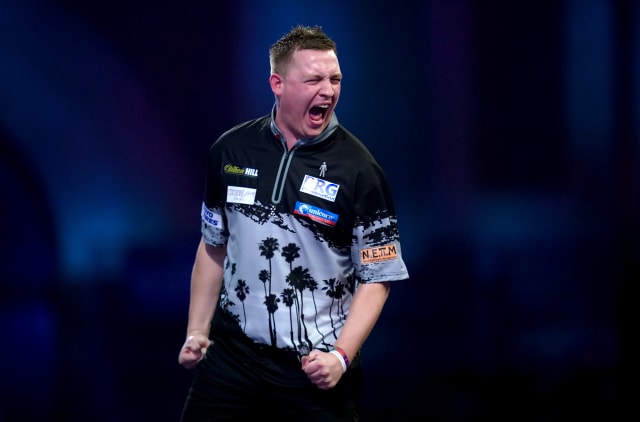 Chris Dobey is hoping for a third-round showdown with history-making Fallon Sherrock in the World Championships.

Dobey squandered a 2-0 lead in his second-round clash at the Alexandra Palace with Ron Meulenkamp, who missed two darts at double eight in the deciding set to clinch the match.

Dobey took advantage to take a 3-2 victory to set up a third-round date with either Mensur Suljovic or Sherrock, who became the first woman to win a match at the championships with her own 3-2 win over Ted Evetts on Tuesday.

“For me, if I were to play Fallon, it would give me something to test myself against. If I can go out there and beat Fallon, with the crowd against me, that would give me a big lift and show I can play anyone on any stage.”

World number three Gerwyn Price survived a major scare – and the heat inside the Ally Pally – against William O’Connor to take his place in the third round.

Irishman O’Connor was twice one leg away from the match, only for Price to dig deep when it mattered most.

O’Connor then needed double two for a 3-2 lead in the deciding set only to miscount and hand Price another lifeline which the Welshman duly took.

Price, complaining about the sweltering conditions, told Sky Sports: “It was absolutely boiling.

“That’s the most uncomfortable conditions I’ve ever played in. From the first throw I never felt comfortable.

“I hung in there in the end and took my chance. He was probably the better player on the day but sometimes they go your way.”

A remarkable second-round tie between Holland’s Danny Noppert and Callum Rydz saw the first 15 legs all go with the throw, with the 21-year-old from Newcastle taking a 2-1 lead.

But Noppert’s greater experience then came to the fore as he won six of the last seven legs for a 3-2 victory and a place in round three against Kim Huybrechts.

Although Van Der Voort managed to win the third set in straight legs to peg Chisnall back to 2-1, the world number 10’s 64 per cent doubles average saw him home.