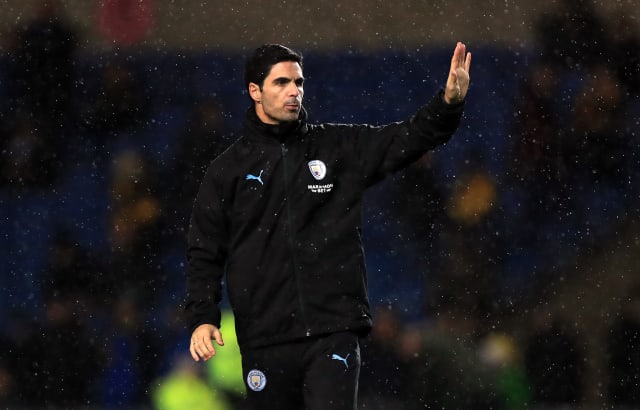 Arsenal are expected to appoint Mikel Arteta as their new head coach in the next 24 hours after postponing Thursday afternoon’s scheduled press conference.

Interim boss Freddie Ljungberg was expected to face the media at the club’s London Colney training ground at 1.30pm to preview the Gunners’ trip to Everton on Saturday.

The Swede has taken charge of Arsenal since Unai Emery was sacked on November 29, but has overseen just one victory in his five-match tenure.

A 3-0 defeat at home to Manchester City on Sunday left the club seven points off fourth-placed Chelsea and the same number off the bottom three.

It led to the Arsenal hierarchy stepping up their plans to appoint Emery’s successor, with managing director Vinai Venkatesham pictured outside Arteta’s house in the early hours of Monday morning.

It is understood City are unhappy that Arsenal did not ask for permission to speak to Arteta and are especially annoyed because Pep Guardiola’s side played at the Emirates on Sunday and no approach was made when club officials met.

City, however, do not have an issue with the 37-year-old and will allow him to make his own decision.

Arteta was alongside Guardiola on Wednesday night as the Premier League champions won 3-1 at Oxford to reach the Carabao Cup semi-finals.

Post-match, Guardiola insisted: “There was no change. I don’t have any news. We prepared the game as best as possible. Before, during and now after and we did it.

“I spoke (Tuesday), my press conference I had 48 questions and 35 were about Mikel so I don’t have to say anything more until there is news. When there is news, in my next (press) conference when you ask me something I will answer.”

Arteta played more than 100 times for Arsenal before retiring in 2016 and is set to take up his first managerial role after three years as Guardiola’s assistant.