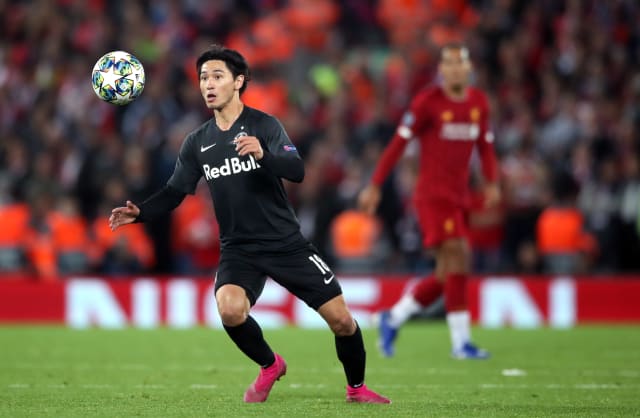 The Japan international arrives for a bargain £7.25million after his release fee was activated last week, and he will officially become a Liverpool player on January 1.

Here, the PA news agency takes a look at the latest new face at Anfield.

Minamino was the top scorer in the Asian Football Confederation under-16 Championship in 2010. He was named J.League Rookie of the Year in 2013 following an outstanding debut season.

Minamino began his pro career in Japan with Cerezo Osaka, where he played alongside former Manchester United and Atletico Madrid forward Diego Forlan. He scored a screamer in a friendly against Manchester United aged 18. However, he left for Salzburg in 2015, shortly before his 20th birthday, after Cerezo were relegated.

The 24-year-old has scored nine goals and provided an impressive 11 assists in 22 appearances for the Austrian side this season. He played in both  Champions League group games against Liverpool and found the net in the 4-3 defeat at Anfield in October. Minamino won the title four times with Salzburg.

Minamino has scored 11 goals in 22 appearances for Japan. He started six of their seven games at the 2019 Asian Cup, and netted in the final as they finished runners-up. He also represented his country at the 2016 Olympics, playing three games and scoring against Nigeria.

Minamino will have no problem understanding Reds boss Jurgen Klopp’s instructions as he can speak German. His new team-mates will take to him too if his description on the Salzburg website, “reliable, hardworking, immaculately disciplined, modest, shy and likeable,” is anything to go by.