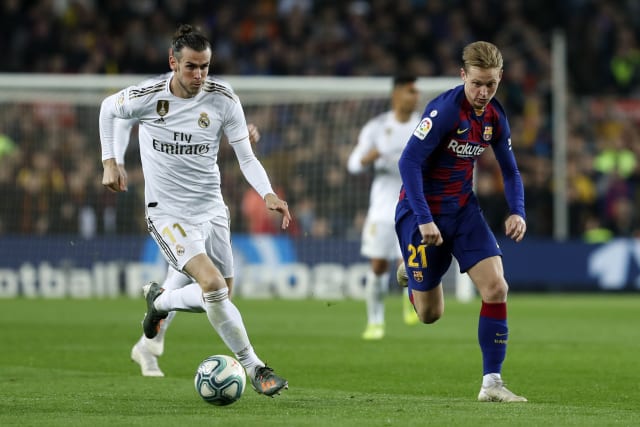 Real Madrid boss Zinedine Zidane was the happier manager after El Clasico ended goalless for the first time since 2002.

Barcelona maintained their slender advantage on goal difference over their arch-rivals at the top of LaLiga after the Nou Camp stalemate.

The game had been postponed in October due to safety fears surrounding the violent protests in Catalonia and while the draw extended Real’s winless El Clasico sequence to seven, Zidane was more than content with a point.

“I’m very happy,” Zidane told a press conference. “I think how we went out on the pitch, how we played from the first minute to the last, I think we played an incredible match.

“We were just missing a goal. We deserved a bit more today, but that’s football.

“When you have opportunities to score you have to convert them and what we were missing was a bit of clarity in the final touch.”

Gareth Bale was restored to Real’s starting line-up and he had a second-half effort ruled out for offside by VAR, while Barcelona’s best chance fell to Jordi Alba in the first period but he fired wide.

Zidane added: “We have to continue in this way because we are doing very well and I have to congratulate the players because this is not an easy stadium to play at, against a complicated opponent.

“We know the quality of their players, but we controlled the match and played in their half.

“They are not a comfortable team to play when you are going after a win and we have to be happy with the point.”

Barcelona boss Ernesto Valverde admitted his side had found it difficult to impose themselves against organised opponents who were high on energy.

“It was a very disputed match in which there were phases for both teams,” Valverde told Movistar.

“They squeezed us high and created problems with high balls. That’s where we’ve suffered.”

Madrid’s high press was effective and Valverde said: “We expected this. In the end they are situations of individual duels that you must solve. Sometimes we have achieved it and sometimes not.”

Ivan Rakitic was a last-minute replacement for Sergio Busquets in Barca’s midfield and Valverde added: “It is true that Busquets was feeling bad, he had a fever, before the game.

“We thought we could have used him in the second half but not in the end. The coach makes the decision based on what he sees.”