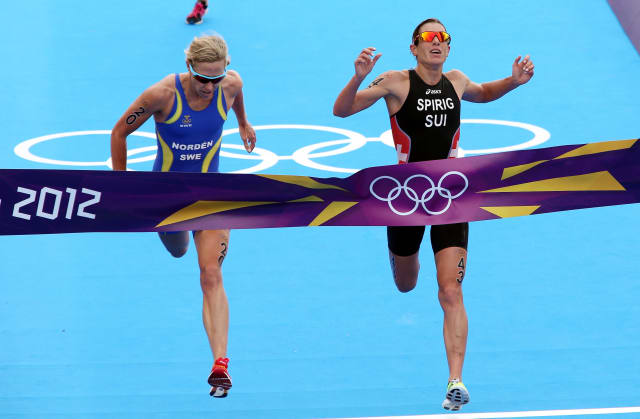 Nicola Spirig lets out a hearty laugh as she admits her latest challenge is “a bit crazy”.

The Swiss triathlete is training for a fifth Olympics in Tokyo next year, where she will hope to win a third successive medal having taken gold in London in 2012 and silver in Rio three years ago.

But this time she has three children in tow.

Six-year-old Yannis has already been to one Games but this will be a first experience for Malea and Alexis, currently two and eight months, respectively.

Spirig returned to racing just 12 weeks after Alexis’ birth, fitting in training around breastfeeding, and her eighth-placed finish at the World Series event in Hamburg was a huge leap towards Tokyo qualification.

It is no wonder Swiss sports company On, for whom Spirig is a global ambassador, have created a video story about her called ‘Superfrau’ (superwoman).

“I have to laugh sometimes myself,” Spirig tells the PA news agency. “I would never have thought I’d go to five Olympic Games and with three kids. It is a bit crazy.

“We knew it wouldn’t be ideal for preparing for the Olympics. We had the third kid in April, which already made the qualification a question mark.

“I wasn’t sure I could do it so being in the position I am now and being able to say I’ve basically done everything to qualify, I’m free in my planning, is a really good situation. But it’s going to be a huge challenge.

“Not even the nights are as they should be and there will be many, many things that are not ideal for preparing professionally but I am of the opinion that with kids you also have advantages and you see life differently.

“I’ve achieved everything I want in my life. I have my three kids, which are the absolutely most important thing in the world to me, and, to be in that situation, to have won the Olympics, to have doubled up with the second place, I think it can also be a huge advantage to go in relaxed and say I can take risks.

“And, if it works out and I’m among the best ones again, that’s amazing, and, if it doesn’t, I have these four people at the finish line waiting for me and they look at me exactly the same.”

The 37-year-old made her Olympic debut in Athens in 2004, finishing 19th, and was close to winning a medal in Beijing four years later when she came sixth.

Her husband, fellow triathlete Reto Hug, voiced his wish for a family ahead of the London Games but Spirig “wanted to be really selfish” and give herself the best chance of an optimum performance in Hyde Park.

“I knew priorities would change as soon as I had a family,” she says.

“Even before the race, I wrote a letter to all my training mates and my coach saying thank you very much, that the preparation had been absolutely perfect and, no matter what happens, I will be really happy, and I was happy to finish my career after that.

“To become an Olympic champion of course was even more amazing.”

Yannis arrived in 2013, and Spirig returned to training still unsure whether she wanted to resume life as a professional athlete.

“My husband was working 100 per cent and I started to train again and it went well but after six months I said, ‘It’s not working’,” she explains.

“At that point I thought I’m really happy to finish my career or my husband reduce the work to like 50 per cent, and then he said, ‘I don’t like my job anyway so I quit!'”

Since then, Hug has been the primary carer for the children while Spirig swims, bikes and runs around the world.

“He think he enjoys it,” says Spirig. “He sees other fathers who have not a lot of time with their kids. Of course it’s not an easy job so he also enjoys it if he can do something for himself but overall we are really happy.”

Yannis has already dipped his toe in the sport, taking part in a children’s triathlon series that Spirig and Hug organise in Switzerland, but he will not be pushed into the family business.

“He sees people wanting autographs or a picture with me but I try to show him that it’s not important what you do,” says Spirig.

“If I’m a teacher, or a sportsperson or an Olympic champion, it’s important that you do what you love and, if you have a dream, that you work really hard to achieve it. It’s just amazing to live your dream, it doesn’t matter what it is.”

What that dream will entail after Tokyo remains to be seen. Spirig also has a law degree but cannot see herself sitting in an office every day. She could reverse roles with her husband or continue her life as a triathlete, perhaps over longer distances.

Could there even be a sixth Olympics? The suggestion draws another hearty laugh.

“I think regarding the Olympic Games, no, but I said that before, so you never know.”