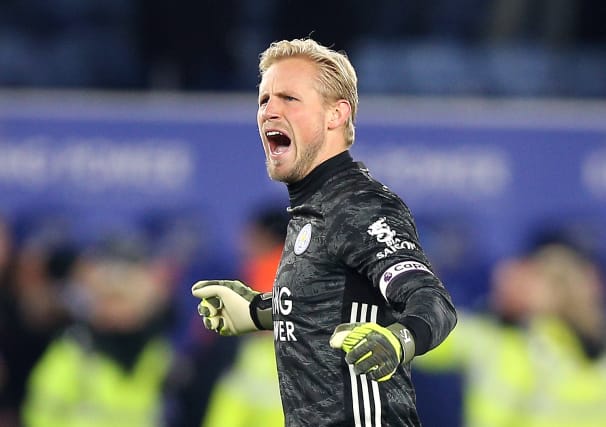 Kasper Schmeichel was the hero for Leicester as the Foxes defeated Everton on penalties to reach the semi-finals of the Carabao Cup for the first time in 19 years.

In scenes reminiscent of Everton’s Premier League victory over Chelsea, interim manager Duncan Ferguson hoisted a ball boy above his head in celebration after Leighton Baines drilled in a stunning 90th-minute equaliser to make it 2-2 at the end of normal time.

That completed a second-half comeback, with Tom Davies netting in the 70th minute after James Maddison and Jonny Evans had scored in quick succession in the first half for Leicester.

Jordan Pickford’s stunning save from Maddison in the first action of the shoot-out had Everton fans dreaming of a perfect comeback but Schmeichel denied Cenk Tosun and, cruelly, Baines to put Leicester on the front foot.

It was left to Jamie Vardy to confidently convert the decisive spot-kick, giving Leicester a 4-2 victory in the shoot-out and maintaining manager Brendan Rodgers’ remarkable record of not having lost a domestic cup competition since April 2015.

With the game sold out and both managers naming strong teams, Ferguson was looking for more of the atmosphere from that Chelsea game.

Writing in the programme, the Scot said: “The past two games have taught us we can go toe to toe with anyone – but we’ve also learned more about what it takes to fight with these top teams. You need to be brave. Take a backwards step and you’re like sitting ducks, waiting to be picked off.”

Things started well. A big roar greeted the entrance of the teams and a uncharacteristically-sloppy back header from Evans let in Richarlison in the fourth minute but, although he beat Kasper Schmeichel, he was eventually crowded out.

All too soon from a home perspective, though, Leicester were dominating possession and that sitting ducks analogy was looking worryingly accurate.

Everton were given a warning in the 16th minute when Ricardo Pereira’s pull-back was dummied by Jamie Vardy for Ayoze Perez to shoot over the bar.

Ten minutes later Maddison made no such mistake, using the time he was given to control Ricardo’s pass and curl a delicious finish into the far corner with the outside of his right boot.

Three minutes later Evans had the freedom of the six-yard box to tap in Vardy’s flick-on from Maddison’s corner.

Leicester were simply quicker and sharper, but Everton’s fans had not given up hope and the team responded with their best spell of the half.

Yerry Mina’s header from Bernard’s free-kick was gratefully held by Schmeichel before Richarlison shot across goal but wide.

Ferguson made a change for the second half, giving Moise Kean another chance after his difficult experience against Manchester United, when he was sent on in the 70th minute only to be substituted 19 minutes later.

Everton would have been three down with less than an hour gone but for a good save by Jordan Pickford, who rose athletically to push Perez’s venomous strike over the bar.

Kean’s first contribution was a well-struck shot deflected behind by Ben Chilwell and, from the resulting corner, Mina should have pulled one back but got his header in front of goal all wrong.

A third Leicester goal continued to look more likely, though, with the Foxes hugely dangerous on the break.

Pickford had to be alert again to save from Dennis Praet with his feet while the pace of Vardy saw him rob Seamus Coleman and set up Marc Albrighton, who curled a shot against the angle of post and bar.

But hope arrived for the hosts in the 70th minute courtesy of Davies, who met Richarlison’s cross on the volley with enough force to beat Schmeichel despite the keeper getting a hand on it.

Kean then gave a glimpse of why Everton paid more than £20million for him, turning and crossing for Dominic Calvert-Lewin, but he could not keep his header down.

With the match heading into injury time, the noise ramped up another level and Baines chose his moment perfectly to unleash a drive into the top corner for his first goal in more than two years.