James Wade moves into third round at World Championship 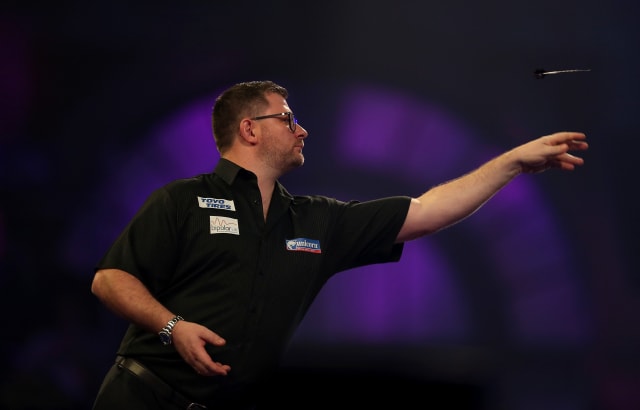 James Wade cruised into the third round of the World Championships with a clinical 3-0 win against Ritchie Edhouse at the Alexandra Palace.

Two-time semi-finalist Wade missed only five attempts at double and then revealed it had not been as easy as it looked.

“I felt really nervous tonight, I was a bit uncomfortable up there,” Wade told the PDC’s offical website.

“I should’ve been more comfortable, but I’m happy to be through … but I should have a different mindset for the next one.”

“I’m massively relieved, it was a difficult game because Jose kept battling back,” Bunting said.

“I always felt up for the battle and to win it in the way I did shows I’ve got the guts.

“I truly believe I can win this tournament and now it’s about going out there and showing it.”

Josh Payne had a comfortable passage into the second round, beating Brazil’s Diogo Portela 3-0 and Germany’s Nico Kurz missed a dart at double 12 for a nine-dart finish on his tournament debut in a 3-1 first-round win against James Wilson.

Fellow German Gabriel Clemens paid a high price for missing four match darts in his 3-2 first-round defeat to Dutchman Benito van de Pas, who came back from 2-0 down in the final set.

Harry Ward, 22, came back from the brink on his World Championship debut as he won the last six legs without reply to edge past Latvian first-round opponent Madars Razma 3-2.

Ron Meulenkamp cruised through to the second round by beating New Zealand debutant Ben Robb 3-0 and Seigo Asada beat Northern Ireland’s Mickey Mansell by the same score to follow Japanese compatriot Yuki Yamada into round two.