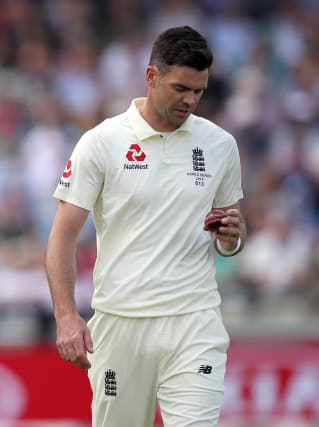 James Anderson returned to lead a depleted England bowling attack as the tourists took to the field for the first time in South Africa but Joe Root’s men endured a chastening morning in Benoni.

Jofra Archer, Stuart Broad and Jack Leach were all ruled out of action by an illness which has hit the camp, while Ben Stokes’ late arrival following his BBC Sports Personality of the Year win and Mark Wood’s ongoing rehabilitation programme meant bowling options were stretched.

Having made 309 for seven on day one – including three retirements – England saw a local Invitational XI put on 147 for two in a profitable first session.

The main positive was seeing Anderson back in England whites for the first time since he pulled up with a calf injury on the first morning of the Ashes in August, but he showed signs of rust in his opening burst.

After starting with two tight overs and an attacking field, his line began to waver and he shipped six boundaries in his next four. Curran fared better with the new ball, toppling Isma-eel Gafieldien’s off stump with his fifth delivery then having Modiri Litheko caught at point from a short ball.

That brought Kabelo Sekhukhune (64 not out) and Jacques Snyman (unbeaten on 61) together at 18 for two and they proceeded to make hay, with an unbroken stand of 129 before the break.

Chris Woakes was unable to make an impression in five overs, Curran’s second spell failed to yield the results of his first and uncapped leg-spinner Matt Parkinson, thrust into action by Leach’s sickness, had a tough time.

The Lancashire man went for 46 in eight overs and was clubbed for three sixes by the punchy Snyman, who scored at a breezy run-a-ball.