Cruel lesson for emotional Ferguson as Leicester win on penalties 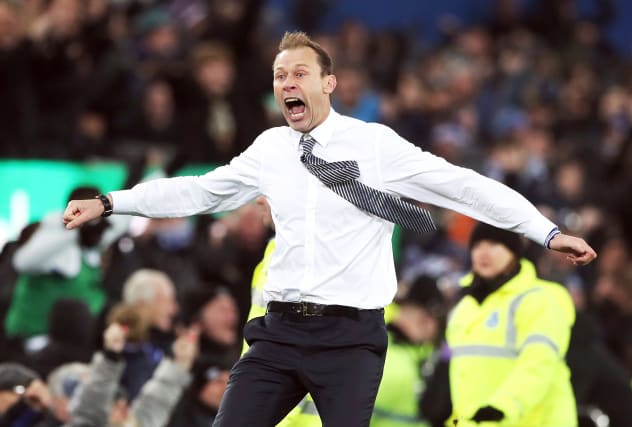 An emotional Duncan Ferguson was given a cruel lesson in the highs and lows of management as Everton mounted a stirring comeback in their Carabao Cup quarter-final against Leicester only to lose on penalties.

After James Maddison and Jonny Evans had put Leicester two up during a first half they dominated, Tom Davies pulled a goal back with 20 minutes to go and a rocket from Leighton Baines in the 90th minute made it 2-2.

That sent interim boss Ferguson sprinting down the touchline to celebrate with a ball boy again, just as he had during his first match in charge against Chelsea.

Ferguson admitted he thought a shoot-out victory was “written in the stars”, especially when Jordan Pickford saved the opening penalty from Maddison, but Kasper Schmeichel responded by keeping out efforts from Cenk Tosun and, cruelly, Baines before Jamie Vardy netted the decisive kick.

Ferguson revealed there were “a lot of tears” in the changing room, and the Scot’s voice cracked on a couple of occasions during his press conference as he reflected on a missed opportunity.

“They’re obviously gutted in there,” he said. “There’s a lot of tears. I’m gutted for Seamus Coleman, Leighton Baines, guys like that.

“It was a big chance for us to get to the semi-final, we’re at home and I was just really disappointed in the first-half performance. But it was understandable considering it was virtually the same team (as faced Manchester United on Sunday).

“I thought the second half they showed much more aggression and we put in a very good second-half performance.

“I thought it was going to be our night once Leighton smacks that one in the top corner, I thought it was written in the stars that we were going to come through. You get Jordan saving the first penalty, what a fantastic save, it just wasn’t to be unfortunately.”

Everton have reportedly lined up Carlo Ancelotti as the permanent replacement for Marco Silva, but Ferguson expects to stay in the hotseat for Saturday’s Premier League clash with Arsenal.

He said: “I don’t know 100 per cent, I’ll talk to the owners and the directors. I would think I’ll be in on Saturday because it’s such a quick turnaround. At the moment I’m preparing for Saturday. We’ve got a massive game and we’ve got to be ready.”

Leicester’s tremendous season continued, with the Foxes through to their first major semi-final since winning this competition in 2000.

There was, though, frustration for manager Brendan Rodgers, who has not lost a domestic cup tie since April 2015, that they did not complete the job in normal time.

Leicester had several very good chances to score a third goal prior to Davies’ volley, with Marc Albrighton hitting the bar.

“I thought we were much the better team,” said Rodgers, whose side will face Aston Villa in the last four.

“First half we had good control of the game, scored two very good goals and maybe could have had more. Second half we started well, should have gone 3-0 up, unfortunate to hit the bar, and then we sort of waited on the game a little bit and out of nowhere they get the goal.

“And I think what you’ve seen over these last few games with Duncan is he’s given the team and the crowd here real spirit. But even at 2-1 we were pretty comfortable and then out of nowhere Leighton scored an amazing goal.

“We just had to clear our heads. We felt we were the better team but we needed to show it on the penalties and in fairness they took the penalties really well and Kasper obviously made the saves. I felt we deserved to get through. It’s brilliant for the players.”