The Grizzlies down the Heat in NBA upset 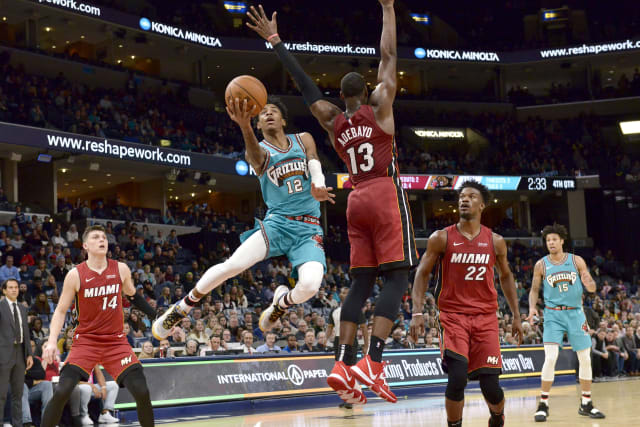 The Memphis Grizzlies pulled off a major upset by beating the Miami Heat 118-111 in the NBA on Monday night.

But the Grizzlies produced a superb team effort to earn a 73-58 lead at half-time, and held on despite being outscored 53-45 in the second half.

The points were evenly shared through the home team, with Jonas Valanciunas the top scorer with 21, ahead of five team-mates who got 14 points or more.

The Houston Rockets set a franchise record by coming back from a 25-point deficit to beat the visiting San Antonio Spurs 109-107.

The Rockets were swamped on their home court in the first half, trailing 35-21 at the end of the first quarter and 72-53 at half-time.

But they rallied to take the lead inside the last five minutes and hung on, with Russell Westbrook leading the way with 31 points and James Harden scoring 28.

Meanwhile, the Eastern-Conference-leading Milwaukee Bucks suffered a 120-116 defeat against the Dallas Mavericks.

While Bucks star Giannis Antetokounmpo dominated with 48 points and 14 rebounds, Dallas – third in the Western Conference – jumped to a 36-22 lead at the end of the first quarter which helped them withstand comebacks from Milwaukee in the second and fourth quarters.

Seth Curry and Kristaps Porzingis led the way for the Mavs, with 26 points each.

In Detroit, Bradley Beal fired the Washington Wizards off to a flying start and the visitors stayed in front throughout to earn a 133-119 win over the Pistons.

Beal scored 15 points in the first quarter as Washington raced into a 43-31 lead by the first break.

Detroit pulled back to within seven points at half-time and six points at the last break, but Washington came away again to win by 14, with Beal ending with a game-high 35 points, plus 10 assists.

In the day’s other games, the Toronto Raptors thrashed the hapless Cleveland Cavaliers 133-113, the Oklahoma City Thunder won 109-106 at home to the Chicago Bulls, and the Portland Trail Blazers scraped through away to the Phoenix Suns, winning 111-110.