Pogba’s recovery from ankle injury set back by illness 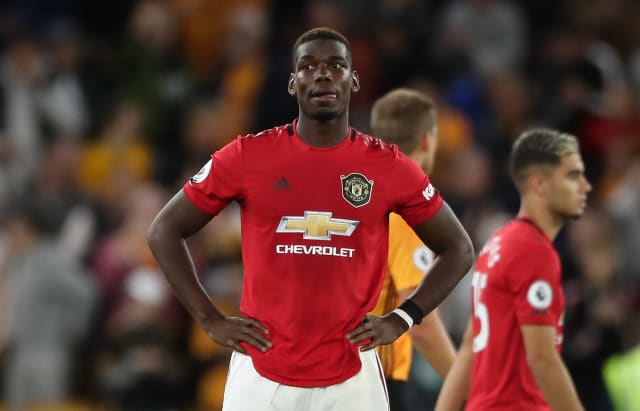 Paul Pogba’s recovery from an ankle injury has been compounded by illness, with Ole Gunnar Solskjaer suggesting it has set the Manchester United midfielder “back quite a bit”.

Having fuelled speculation about his future during a summer of intense scrutiny, the 26-year-old has not featured since September due to an ankle injury that has restricted him to just six appearances this season.

United manager Solskjaer has spoken confidently about the Real Madrid target returning to action before the end of the year and Pogba had been due to resume first-team training this week, only to succumb to a new problem.

“Of all things he’s struck down ill now,” Solskjaer said on Sunday, when previewing the Carabao Cup quarter-final against Colchester.

“He’s been off for two or three days – three days probably – so that’s not beneficial. That’s probably set him back quite a bit.”

The PA news agency understands the midfielder had permission to attend the wedding in France on Friday, before falling ill on Saturday and getting worse on Sunday.

“As I’ve said so many times, Paul’s a top, top player that we want to see playing his best football at Man United,” Solskjaer said.

Pogba’s presence was certainly missed on Sunday, when United were crying out for a creative midfielder in the 1-1 league draw with Everton.

“We can talk about Paul all day long and it’s games like this for example when you’re lacking that one creative pass or ideas maybe,” Solskjaer said.

“He has that quality that not many midfielders in the world have so to get him back would be great.”

Pogba will again be sidelined as United take to the field on Wednesday, when Diogo Dalot could make his first appearance in 10 weeks.

“Any player or any team – and for us now it’s a good team that’s building – would benefit a lot from winning a trophy or getting to a final, of course winning it is major,” Solskjaer said.

“Now we’ve got a chance of getting into the semis so for us this game is a big one.”

Asked about the importance of leading the side to a first trophy, Solskjaer, who never won the League Cup as a player, said: “I think so yes, definitely.

“We showed that by the team we put out against Chelsea, that we take this seriously, even though we were in a difficult spell in the league it was still important for us to create that momentum and belief in the players.

“Yes definitely, we’re hoping to get to the final.”

Solskjaer plans to make changes and rotate against Colchester, but pledged the side will be strong enough to win the game, “create chances and hopefully score goals”.

Mason Greenwood could well playing a starring role again on Wednesday, having followed up a brace and man-of-the-match display in the Europa League against AZ Alkmaar by hitting the leveller against Everton.

“He’s making it hard for me to leave him out,” Solskjaer said of the 18-year-old.

“I remember when I came to the club as well and I kept scoring a few goals but still I felt I could perform better, I’m not involved in the game, but the manager’s comments were that it was hard to keep players who score out of the team.

“It’s very, very difficult now to put a team out there without having Mason in my mind, yeah.”