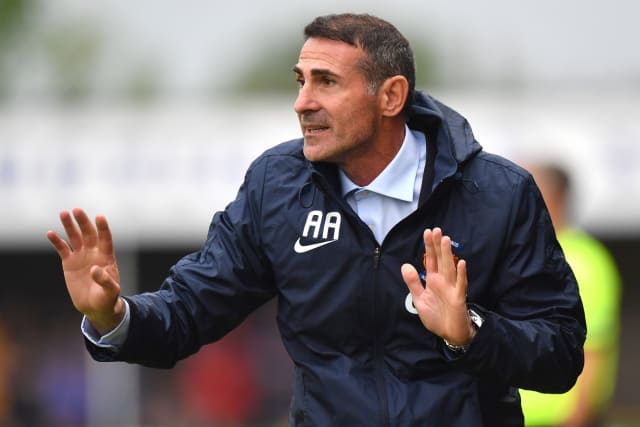 Billy Bowie hailed Angelo Alessio as the best manager in Scotland when he appointed Steve Clarke’s successor – but six months on the Kilmarnock owner has been forced to admit his gamble failed.

It was always going to be a major challenge for Antonio Conte’s former right-hand man – who has been sacked after barely six months in charge – as he took over from a boss who last term led the club to their highest league finish since 1966.

But from the off Alessio was left fighting to survive as his side’s disastrous early exit from the Europa League to Welsh minnows Connah’s Quay Nomads made a mockery of Bowie’s glowing tribute.

The Killie chief was left with a dilemma after seeing Clarke poached by Scotland.

The former West Brom and Reading manager brought the crowds flocking back to Rugby Park – but now the Ayrshire faithful wanted a major name to replace him.

In Alessio, Bowie thought they had found just that.

“We have been saying since Steve left ‘we will have the best manager in Scottish football’,” said Bowie as he unveiled the Italian. “I firmly believe we’ve got that.”

A Uefa Cup winner with Juventus as a player, he later teamed up with Conte as his old team-mate went on to lead the Old Lady to three Serie A titles and a Premier League crown with Chelsea.

However, his three brief spells as a manager in his own right in the Italian lower leagues provided little to suggest he could replicate the steely leadership that had allowed Clarke to so successfully turn around a team destined for relegation when he took over in October 2017.

His experience with Conte and his list of contacts was the attraction for Bowie – but it soon went wrong.

Killie’s failure to get past Connah’s Quay was seen as a national embarrassment and left fans out of pocket after they booked up to see their side take on Partizan Belgrade in the full belief they would take care of Andy Morrison’s part-timers.

Rumours of unrest soon filtered out of the dressing room, while Alessio’s struggles with English left him unable to properly explain what had gone wrong.

After Killie took just one point from their first three league games, Kirk Broadfoot unexpectedly quit to return to St Mirren. He hit out at Alessio’s training regime and even claimed he was forced to go the gym after hours to top up his fitness levels.

Fortunes did turn and three straight league wins on the trot during October saw Kilmarnock rise to third spot.

But that upsurge did not last and after four games without a win, the Killie board have decided a change is needed.

Alex Dyer, who played a crucial role alongside Clarke as Kilmarnock booked a European slot for the first time since 2001, will take temporary charge.

Confirming Alessio’s departure, Kilmarnock said in a statement: “We would like to thank Angelo for his efforts during his time with Kilmarnock and we wish him every success for the future.”