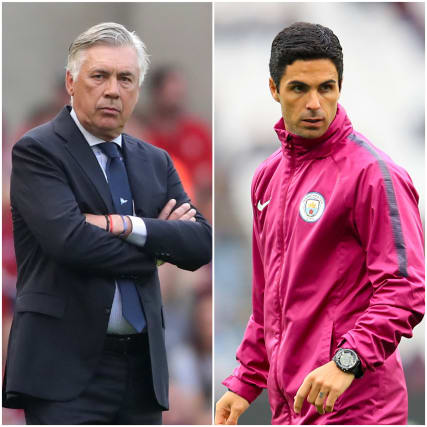 Manchester City assistant manager Mikel Arteta is on the verge of being appointed Arsenal’s new manager, but City say he will not come cheap, according to the Daily Mail. Arteta was due to have a third meeting with Gunners bosses on Monday night, as the club seeks to replace Unai Emery. City are said to be unimpressed that Arsenal have not contacted them about luring Arteta away, and are reportedly set to put a seven-figure price on his head.

Leicester are keen to lure young Turkey defender Merih Demiral to the King Power Stadium in the January transfer window, the Leicester Mercury reports. The 21-year-old has only played three games for Juventus this season after a summer move from Sassuolo, but has impressed through 11 matches for his country. The Foxes could field an all-Turkish pairing in central defence if they sign Demiral, with his countryman Caglar Soyuncu having shone at centre-back at Leicester this season.

Carlo Ancelotti is set to be confirmed as Everton’s new manager possibly before Wednesday’s Carabao Cup match against Leicester, according to various reports. The Daily Mail says that while David Moyes has been interviewed about a possible return to the club, Ancelotti holds the front-running thanks to his record at major clubs such as Chelsea and AC Milan.

Chelsea have added two forward targets to their January shopping list in RB Leipzig’s Timo Werner and Lyon’s Moussa Dembele, according to the Daily Mail. Blues manager Frank Lampard has been given £150million to spend, and the two 23-year-olds are in his sights, the paper says.

Hull’s 22-year-old forward Jarrod Bowen has attracted the attention of Leicester, Newcastle, Southampton and Leeds after scoring 15 goals in the Championship this season, the Leicester Mercury reports.

Ashley Young: The 34-year-old defender is set to leave Manchester United next summer and is ready to talk to other clubs, according to ESPN.

Adama Traore: Tottenham are considering a move for the 23-year-old Spaniard after he impressed against them for Wolves on the weekend, Football Insider reports.

Sam McCallum: Liverpool and Leicester are among the clubs watching the highly-rated 19-year-old Coventry defender, the Daily Mail reports.