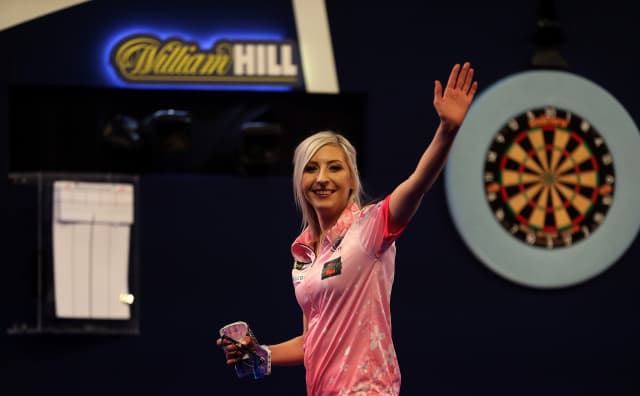 Fallon Sherrock was left speechless after creating history by becoming the first woman to beat a man at the PDC World Darts Championship when she defeated Ted Evetts.

Sherrock, a former BDO Women’s World Championship runner-up, recovered from losing the opening set to beat PDC Development Tour winner Evetts 3-2 – scoring some six 180s with a match average of just over 91 in their first-round contest.

“I’m speechless, I don’t know what to say,” Sherrock told Sky Sports Darts after her victory on the stage.

“I feel really happy because I have proven something for women’s darts, that women can play the men and beat them, so fingers crossed this is a move in the right direction.”

Evetts had lost his throw in the opening leg of the deciding set, as Sherrock – cheered on by the vocal support at a packed Alexandra Palace – moved 2-0 ahead.

The 22-year-old held his next arrows – but another big score from Sherrock left her with three match darts at double 18.

Sherrock, 25, from Milton Keynes, took a second match dart to write her name into the history books and will go on to face Mensur Suljovic, the 11th seed, in round two.

Earlier during Tuesday’s afternoon session, Devon’s Ryan Searle edged out Robbie King 3-2 in their first-round match, the Australian having missed a match dart in a sudden-death leg.

Spainard Cristo Reyes recovered from two-sets down to defeat PDC Asian Tour winner Lourence Ilagan of the Philippines, and will go on to meet Adrian Lewis, two-time former world champion, in the second round.

Noel Malicdem progressed with a 3-0 victory over Rowby-John Rodriguez to secure a showdown against Peter Wright, the world number seven.

Poland’s Krzysztof Ratajski, who has won six PDC ranking titles, booked his place in the third round with a 3-1 win over Austrian Zoran Lerchbacher.

During the evening session, tournament debutant Ritchie Edhouse beat Russian Boris Koltsov 3-1 in the first round.