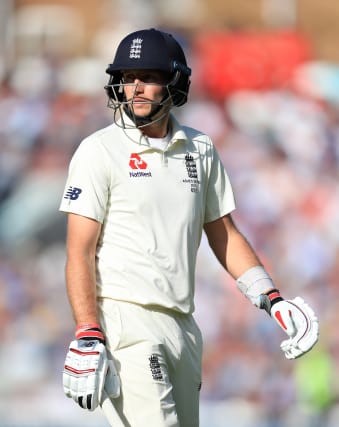 Joe Root, Joe Denly and Dom Sibley all banked unbeaten half-centuries as England got their tour of South Africa under way with a leisurely day at the crease in Benoni.

Lining up against a willing but limited Invitational XI at Willowmoore Park in the first day of two, England racked up 309 for seven, with all three of their top scorers retiring out to give others a chance.

Root top-scored with 72 in just 86 balls, a free-scoring knock to follow his double century in the last Test against New Zealand, while Denly cashed in on a dropped catch to make a lively 60.

Opener Sibley was more reserved as he ground out 58 in 140 deliveries but caution is a quality England are keen to develop in their top order and he will have been primarily pleased to spend more than three hours in the middle.

Elsewhere in the order, Rory Burns, Jos Buttler and Jonny Bairstow all fell softly in the teens, while Ollie Pope appeared disappointed with the lbw decision that sent him on his way for 20.

England will spend Wednesday in the field, when they hope both Jofra Archer and Stuart Broad will be fit to take a full part after being laid low by colds, before finishing preparations for the Boxing Day Test with a three-day first-class match against South Africa A.

The contest began in sedate fashion as Burns and Sibley snuffed out the new ball with 37 chanceless runs in the first hour. Burns promptly gifted his wicket, taking on left-arm seamer Stephan Tait but top-edging a hook to fine-leg.

Denly got off the mark in style, thrashing a pull in front of square for four, and helped ease along a lunch score of 76 for one.

He was put down at cover on 28 but went on to rub salt into the wounds of the unlucky bowler, Kyle Simmonds. He set about the spinner, using his feet to launch him for four and six down the ground, then slashed successive boundaries through cover in the following over.

By the time he reached 50 he had overtaken the more attritional Sibley, who eventually had cause to raise his own bat to the dressing room.

Sibley was hit on the helmet shortly before retiring but that had little to do with a pre-determined decision that saw both men fall on their swords following a 103-run stand.

Root was soon scoring swiftly, placing his shots at will as he moved serenely towards the third half-century of the innings, but Pope’s charge was halted when Matthew Arnold won a dubious leg before.

The England captain had no such worries and took 16 runs from a playful final over, turning to jog from the field before a slog-sweep for six had even landed.

Buttler was dropped at slip off Simmonds on just five but offered a replica chance to depart for 15 and Bairstow’s return to England whites following his dropping in New Zealand ended when he smacked a rank full toss to mid-on.

Zak Crawley (28no) and Sam Curran (18no) closed things out in a becalmed final hour but tougher challenges lie ahead.