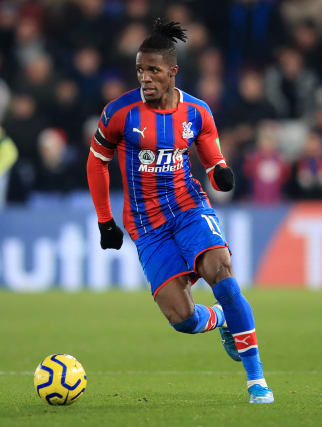 Crystal Palace defender Scott Dann has talked up Wilfried Zaha’s influence after the winger struck late on at Selhurst Park to earn them a point against rivals Brighton on Monday.

The Ivory Coast international found the net in the Premier League for the third time this season and for a sixth occasion in total in this grudge fixture between the two clubs.

Brighton had dominated much of the encounter and looked set for a third straight win over Palace thanks to Neal Maupay’s opener, but Zaha smashed home with aplomb in the 76th minute to ensure it finished 1-1.

“That is why he is so important to us and it changed the game. From then on we looked like we could maybe have gone on and nicked it in the end, which is strange to say because we didn’t play well at all.”

Ahead of next month’s transfer window, talk surrounding the future of the Palace academy graduate is already gathering pace.

But the Eagles will welcome the opening of the winter window with a number of injuries to contend with at the moment.

Makeshift left-back Jairo Riedewald has added to those problems after suffering a hip injury in training on Sunday and being withdrawn at the break against the Seagulls.

It led to boss Roy Hodgson admitting post-match that he hoped the club’s American owners Joshua Harris and David S Blitzer would “release some money” in January.

Centre-back Dann added: “I think until a couple of weeks ago the squad looked strong, especially in certain areas.

“At the back with five centre-backs, but we only had one full-back on either side, so there are areas that we probably do need to strengthen.

“We’ve got away with certain things over the start of the season, being lucky that people have been available.

“At the same time we’re in a good position and there are probably places where the manager and chairman (Steve Parish) will look at and think we need to add.”

The point moved Palace above Arsenal into ninth, while Brighton are 13th but five points clear of the relegation zone.

Maupay, an August signing from Brentford, scored in a third consecutive game for the Seagulls and for the seventh time overall this season.

Brighton manager Graham Potter said: “He was really good, he works so hard for the team.

“A real top personality and tries his best every day, every training session and every game.

“He missed all of pre-season in terms of game time because he came late to us, so he has had to adapt to the Premier League, but he has scored seven goals now and we’re delighted with him.”