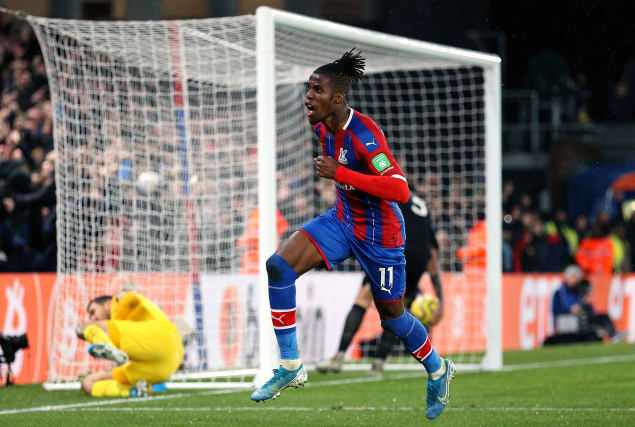 Wilfried Zaha rescued a point for Crystal Palace against rivals Brighton with a superb strike 14 minutes from time to ensure the visitors were made to pay for a lack of killer edge in front of goal.

Graham Potter’s team dominated from the outset at Selhurst Park but only had Neal Maupay’s effort to show for it before the Eagles forward took centre stage and netted his third goal of the campaign.

It meant home manager Roy Hodgson had to be content with a 1-1 draw in his 100th game in charge of Palace.

Brighton immediately took control of proceedings in SE25 and went close through Aaron Mooy in the sixth minute but he drilled just wide from 20-yards.

A number of flying tackles were committed with quarter-of-an-hour played, but the goalmouth action remained at a premium.

That was until the midway point of the half when first Martin Montoya and then Seagulls captain Lewis Dunk tested Vicente Guaita in quick succession.

Brighton could have felt aggrieved not to be awarded a penalty when Jairo Riedewald – on his first league start since February 2018 – appeared to bring down Montoya as he was shooting.

VAR checked the incident, but did not deem the contact enough to give a spot-kick and yet the warning signs were there for Palace down their left-hand side.

Hodgson’s side managed to survive until half-time, but the Seagulls had dominated and the boos from the home supporters told its own story.

James McCarthy was introduced for Riedewald, who had looked off the pace, as James McArthur moved to the unfamiliar position of left-back.

While it did not alter things initially, Palace did manage an attack in the 50th minute and Benteke’s cross looped over Mat Ryan but struck the woodwork and Zaha’s follow-up was easy for the Australian goalkeeper.

At least the Eagles had mustered a shot on target and yet Brighton finally made their superiority count with 54 on the clock.

Leandro Trossard was picked out again with a crossfield pass and this time the visitors took full advantage with Maupay controlling before smashing into the top corner for his seventh goal of the season.

It should have been two for the former Brentford forward five minutes later, but Guaita, who had spilled Davy Propper’s cross, managed to stick a leg out and block the close-range effort from the goalscorer.

Palace continued to struggle and Hodgson turned to Max Meyer with 24 minutes to go – the German in the process made his first appearance in six weeks – and it suddenly kick-started the hosts into life.

Benteke and Jordan Ayew combined before the former forced a corner with a snap-shot and then substitute McCarthy had an effort.

The Eagles had found their wings and out of nowhere they levelled in the 76th minute through their talisman.

Captain Luka Milivojevic’s crossfield ball was flicked on by James Tomkins and Zaha cut back onto his left foot before lashing an effort into the roof of the net for his third goal in his last five games.

Both teams had further chances before the full-time whistle, but it finished all square with Palace most likely the happier of the two given the six players they had out through a mixture of injury and suspension.