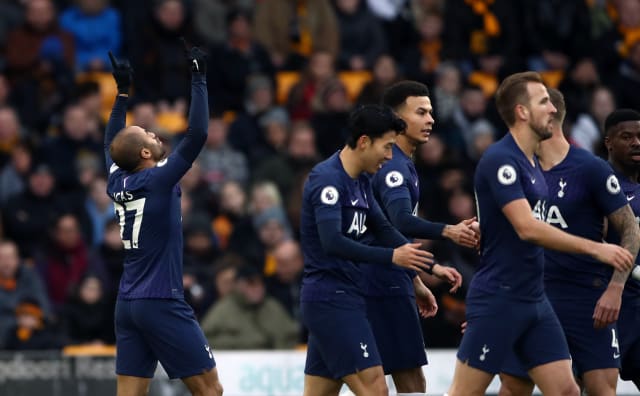 The defender scored an injury-time header to seal a 2-1 win on Sunday and secure a fifth triumph in seven games since Mourinho replaced Mauricio Pochettino last month.

Spurs are now fifth in the Premier League, three points behind Chelsea who they host on Sunday, and Vertonghen insisted winning ugly shows they can adapt in search of victory.

He said: “Yes, the gaffer has a lot to do with it, he’s brought that fighting mentality back and we had a lot of meetings this week about this game.

“Tactically, Wolves are a very good side, they will always have good spells in the game. It was a tough one, at the end you think ‘should we be happy with a draw or not?’ but this feeling is better.

“My feeling would not be any different if someone else had scored that goal. If you saw the celebrations at the end of the game, we dug in deep and coming away with the win meant a lot.

“We had lots of games last season when we won right at the end, it is the best feeling, we can’t give up, Wolves wanted a late goal too – but we believed just that little bit more.”

Lucas Moura put Spurs ahead before Eric Dier hit the post in the first half only for Adama Traore’s 20-yard strike to level after the break.

The Wolves winger was a constant threat with Harry Kane, Toby Alderweireld and Dier booked for fouls on him.

“I tried to take the attention away from that with my goal,” said Vertonghen, who was marking Traore while at left-back. “It was tough, playing one-v-one against someone like that with so much pace but we defended well.”

Wolves dropped to eighth after their 11-game unbeaten run was ended despite dominating for long spells.

Nuno Espirito Santo’s side have still only lost twice in 19 outings but captain Conor Coady believes they should have won.

He told the club’s official site: “We’re really gutted, distraught. It’s something that we’ve got to look at, but from start to finish I thought we were fantastic.

“We pressed them, we had the ball for most of the game, and dominated a team like Tottenham, so it’s disappointing to come away from the game with nothing, not a win and not even a draw.”