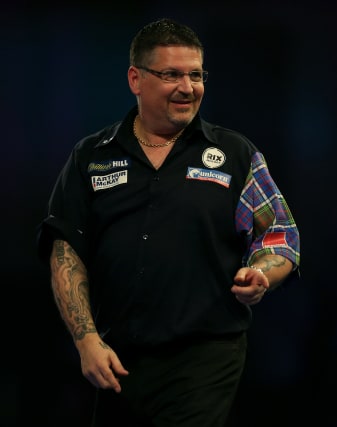 The 48-year-old Anderson threw seven 180s – Dolan did not register any – and made a 144 checkout in the second set as his opponent claimed just a single leg.

The world number five will face Steve West, Ryan Searle or Robbie King in the last 32.

Earlier, England’s Callan Rydz made a winning world championship debut as he edged out Ireland’s Steve Lennon in a final-leg thriller.

Lennon took the opening set by winning three successive legs, but 21-year-old Rydz hit back to lead 2-1 without dropping a leg.

And after Lennon tied the match, the final set went to a fifth and deciding leg.

Rydz almost hit a 161 check-out, and after Lennon twice missed double 18 to take the match, Rydz finished with double two and booked his place in the second round.

There was success for another Irish player, though, as William O’Connor encountered few problems against Finnish qualifier Marko Kantele, winning 3-0.

O’Connor will face Welshman Gerwyn Price, the world number three, in round two.

Seventeen-year-old Irish prospect Keane Barry found the experience of Holland’s Vincent Van Der Voort too much in their first-round clash.

Barry, the third youngest player to feature in the World Championship, had his moments, but Van Der Voort swept to a 3-0 victory to take his place in the second round.