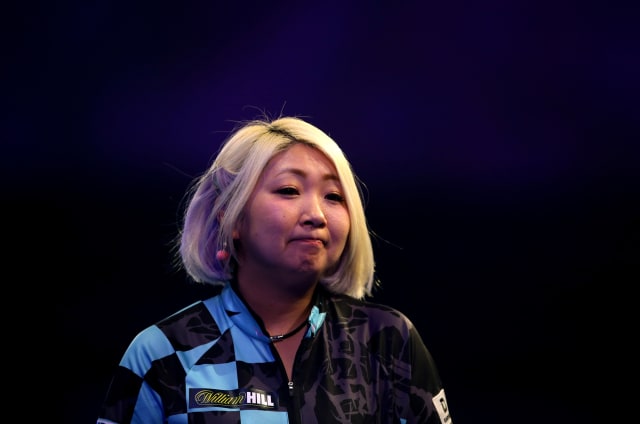 No woman has won a match at the flagship tournament at Alexandra Palace, but the Japanese – who is the BDO women’s world champion – had darts to beat Richardson in the first round.

She had to take out 152 in the sudden-death leg of the match but missed her second treble, which allowed a relieved Richardson to clinch it with double top.

Richardson, who beat Raymond Van Barneveld at this competition in 2012, looked to be enjoying a trouble-free night as he took a 2-0 lead.

But with a boisterous Sunday night crowd behind her, Suzuki fought back to 2-2.

An early break in the deciding set swung the pendulum in her favour, before Richardson regained his composure to force a deciding leg.

Suzuki again took the initiative but a costly visit of just 24 gave her too much to do.

She told Sky Sports: “It is really tough. I am really unlucky but next time I would like to win on this stage.

“Many people were cheering me so I am really happy.”

Fourth seed Michael Smith did become the latest victim of an upset after Luke Woodhouse claimed a memorable 3-1 win.

Last year’s runner-up followed Rob Cross and Van Barneveld out as the seeds kept on falling before Christmas.

It looked like Woodhouse might be left to have nightmares about the double nine after he missed six attempts to take out 18 and win the match 3-0.

But he regrouped in the following set to clear 80 in the deciding leg and take victory.

White outscored his opponent, averaging over 100, but Labanauskas produced when it mattered to seal the shock.

Kyle Anderson came back from the brink to knock out Xiaochen Zong.

The Australian was looking set to return home in time for Christmas as he trailed Xong by two sets and a leg.

But his game suddenly clicked into gear and he stormed back to take a 3-2 victory.