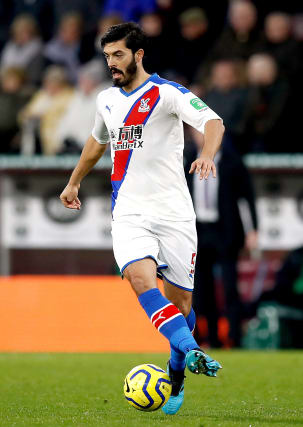 James Tomkins has urged Crystal Palace to build on an improved run of form to stake a claim for a top-half Premier League finish.

Defender Tomkins was a member of the Eagles squad which scrapped its way out of relegation trouble last season but, after helping his team-mates climb to 10th with back-to-back victories over Burnley and Bournemouth and a 0-0 draw at Watford, he is now looking upwards rather than over his shoulder.

He told Palace TV: “The target is to break into the top half if we can. Last season, we fought long and hard to keep ourselves up and at the end of it, we did pretty well and made a great job of it.

Palace host rivals Brighton on Monday evening in what will be manager Roy Hodgson’s 100th game at the helm buoyed by that sequence of results, which followed successive defeats by Leicester, Chelsea and Liverpool.

However, Tomkins saw enough against tough opposition to be confident that they were not very far from where they needed to be.

He said: “We’re in a good place, for sure. If you look at the points that we’ve got on the table so far, it’s a good reflection of how our season is going, really.

“We’re in the top half of the table, which is nice, but there’s obviously still such a long way to go until the end of the season.

“We’ve had a good spell, playing well against some good teams. When we lost those three games, there were some good teams there and we were there or thereabouts. We gave them a good game, all three of them, but the results didn’t really go our way.

“It was important to build some confidence from that going into the games last week, where it was quite physically demanding, to be honest, and we got through it well, undefeated, two wins and a draw, which is pretty good.”

Monday’s game is regarded as a derby by both sets of fans, and Tomkins admits that will bring added spice.

He said: “Monday night under the lights will be a good atmosphere and it will be a good game to play in, so we’re looking forward to the game. It’s a massive one for everyone at the club.”